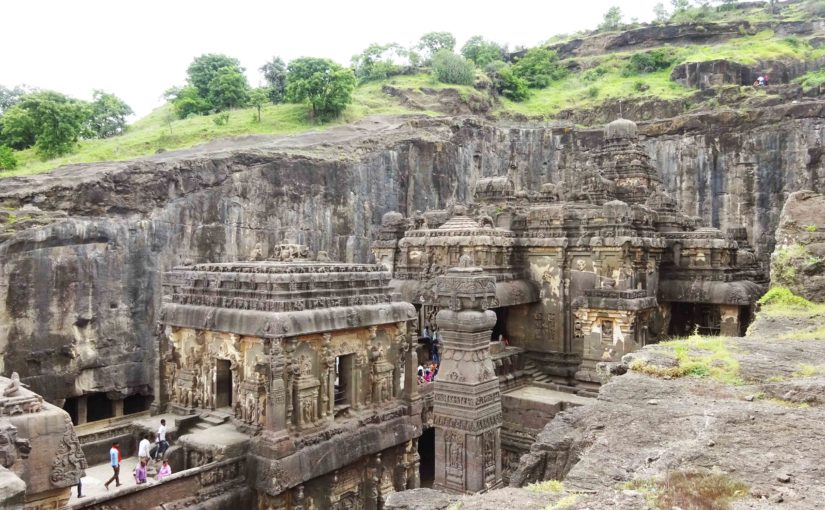 Are you embarrassed by your fellow-travellers? Do you cringe and step away to disassociate yourself from selfie-obsessed loud littering tourists? Do you groan at the sound of passengers unbuckling themselves from the shackles of the airplane seat-belt the second the wheels touch land? I do.

Why do people leave garbage at monuments? Why do we scribble on the walls? Why must we express our love for Mona and Shona and Ramesh on ancient structures? Nobody cares that you <3 Kishore, Laila!

This unsolicited marking of territory is no better than the apartment kitten I feed everyday, who has recently discovered he is a boy and must wee on my couch to announce his existence. He has been christened Lulu McSusuFace, and is not allowed inside my home anymore. Ah who am I kidding. Of course he is. Look at that moonji.

On this trip to Aurangabad, apart from the beautiful caves, I saw the following:

If you plan a trip to Ajanta-Ellora, please do your bit to not destroy what remains of our heritage!

Both Ajanta and Ellora are best done by basing yourself in Aurangabad. Ibuprofen is going to be your best friend. Trust me.

All of the art history lectures I’ve sat through did not prepare me in the least for what I was about to see, and neither do these pictures do justice to it all.

Our driver told us the caves open at 6 am, but “aint nobody gonna wake up that early for crazy tourists. I will come at 8, be ready, it’s only one hour away,” he said.

The moment you step in, you are greeted by the finest of the 34 caves open to public. It will stun you – being the single largest monolithic rock-cut temple in the world!

I won’t bore you with the history because you can read it all in a guide book as you go (please buy one to make any sense of what you’re seeing!) but I will say this – prepare to be elated, surprised, hungry as hell, and exhausted.

That’s just one of the caves! We took a good 6 hours walking around the rest of the Buddhist, Hindu and Jaina caves. You have to take the bus for 21 rupees to the Jaina caves which are 2 kilometres away. You will see larger-than-life statues of the Buddha, Hindu and Jaina deities, and the odd surviving painting (which you can view with a torch, but no flash photography please!)

The Mughals were the kings of grand mausoleums, so visiting Aurangzeb’s tomb feels like someone’s playing a joke on you. He rests in a tiny grave inside a mosque at the end of a busy street in Aurangabad. Nothing announces he’s there, and even the enclosing walls are said to have been a later addition, donated by an Englishman.

It seems he was a man with a wish to rest in simplicity, and simple is what he got.

This fort is MASSIVE and is going to throw in your face exactly how useless your urban workouts are. I could not move my legs the next morning – enter Ibuprofin. The fort takes you on a never-ending climb up to the top, and even has a scary dark passage that reeks unmistakably of bats and rats. It is said to have housed tens of different surprise ways to confuse and kill the enemy – from poisonous gas to boiling hot oil. It is absolutely fascinating, so read up beforehand to appreciate what you see!

Ajanta caves are a 2 hour drive out of Aurangabad, so leave as early as you possibly can. Walk into every cave to see the evolution of rock-cut architecture over the centuries, culminating in the detailed cave at the very end. The surviving dry-fresco paintings are at least 1500 years old, and are falling apart now. The walls here are better protected than Ellora, with line managers, dim lighting, and humidity controllers.

Of course, you still have the odd moron using his flash camera inside despite incessant “no flash” yells from the staff! Try and keep your cool at the screaming parents being a giant blot on the serenity of these beautiful Buddhist monasteries.

Climb all the way up to the very top for an unbelievable view of the gorge and carved rocks.

Unlike Aurangzeb, his wife rests in a typical Mughal tomb, nicknamed ‘Baby Taj’ – which in hindsight may not have been the best idea. You instantly compare it to the Taj Mahal, and boy does it fall short.

It is best to look at it as an independent structure and admire the symmetry, architecture and design for what it is. She rests under a sarcophagus that’s flooded with money, and people toss coins onto her grave even as the signs say not to.

It’s in desperate need of attention and restoration. Go early in the morning on a weekday if you can, for it is the Marina Beach of Aurangabad!

Our taxi driver told us to not bother with the Aurangabad caves – nothing to see there, he said. We’re so glad we ignored him.

The Aurangabad Caves are a tiny cluster set in one of the hills, far enough away from the city to offer calming views of the valleys and the Bibi Ka Makbara.

We even got to see a mongoose taunt a wild peacock!