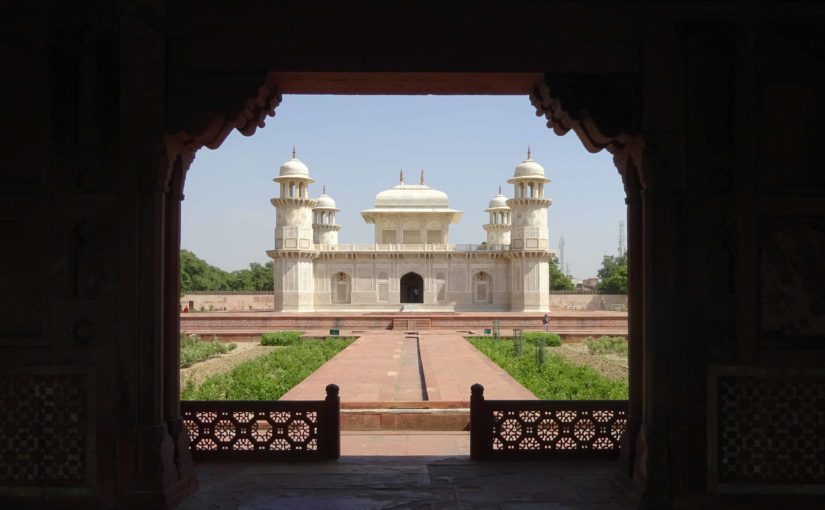 The city of Agra is perhaps one of the most visited by foreign tourists coming to “discover India.” From Delhi, the Gatimaan Express (the fastest in the country) gets you to Agra in about 100 minutes, serves a meal, and even has hostesses, as the public sector attempts to up their tourism game.

But as soon as you step in to what was once capital of the great Mughal empire, you see that it is utterly chaotic, underdeveloped, and a challenge to navigate. It is quite unfortunate that the divide between the rich architectural history, and the current state of affairs is so extreme.

Nevertheless, Agra has plenty for the tourist apart from the Taj Mahal, which will no doubt be the crowning glory of a trip to the city.

To get here from Agra, we booked a cab online with Gozocabs. The driver was well-spoken and knew where he was going, although a little on the expensive side. On the drive there, we encountered groups of religious protesters carrying swords and chanting slogans. It freaked us out when the driver turned around to make sure our doors were locked. They didn’t seem interested in passersby though, but our heart rate took a while to come back down again.

A little over an hour’s drive from Agra, Fatehpur Sikri was conceptualised and constructed by Akbar, and functioned as his capital for about 14 years before the fresh water source dried up and they all had to pack up and move to Lahore.

To get to the structures, you have to park your car below the fort, and a government bus takes you up to the gates for 20 rupees. There is a shocking lack of signs and information – perhaps a way to keep business coming to the guides, who will bargain with you to no end. Don’t pay more than 600 rupees to see both sections though!

The Mughals found immortality in stunning, expensive mausoleums. Some were commissioned by their progeny or grieving spouses, and some were designed by the emperors themselves, for themselves. Akbar’s Tomb is located in Sikandra, a district in Agra. Through the years it has been plundered, stripped of its jewels and gold, and even had Akbar’s bones removed and burned by political enemies. The British ended up restoring it, although quite understandably not to its former glory.

Often referred to as the Baby Taj, this mausoleum was constructed by Empress Nur Jahan (wife of Jahangir) for her father I’tmad-ud-Daulah. It is located on the banks of the Yamuna river, which you can see from one end of the structure.

This fort has been of supreme importance to the Suris, Mughals, and subsequent dynasties as well. When Akbar made Agra his capital, he had many structures restored and rebuilt in red sandstone. Shah Jahan made his love for white marble evident with later additions within the campus. You can walk around to appreciate the courtards, palaces, balconies, meeting halls, prayer halls and entertainment buildings inside.

Shah Jahan was later imprisoned in the fort by his son Aurangzeb, and it is said he died taking in the view of the Taj Mahal which he had constructed in memory of his beloved wife Mumtaz Mahal.

Travel to Agra is recommended in the cooler months!

2 thoughts on “Beyond The Taj – Agra’s Other Stunning Structures”