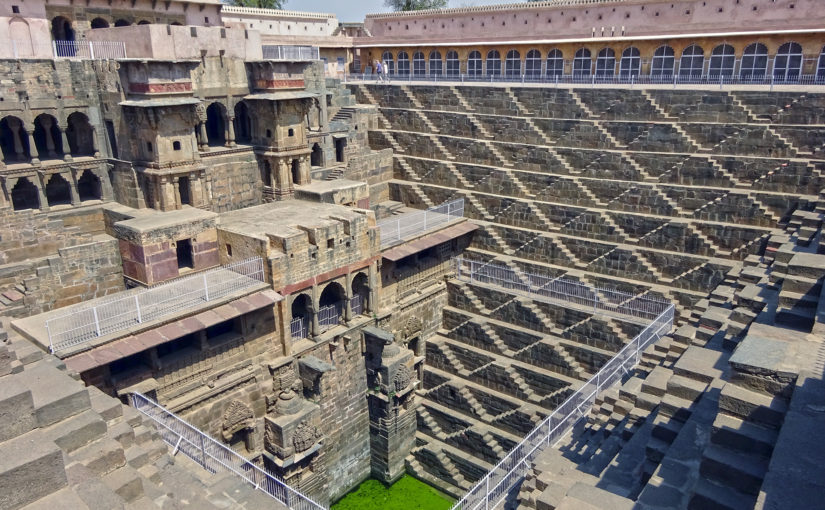 I’m staring at the visual symmetry of a stepwell in the middle of Rajasthan, and I can hardly believe my eyes. We’re on the last day of our Jaipur exploration and happened upon the Chand Ki Baoli by divine intervention from the travel Gods.

While touring the palaces and to-do monuments the previous day, we feel like we’re on a United Nations field trip. Tourists from all over the world wander around taking selfies at the glimmering Sheesh Mahal, and hold up victory signs as they pose with the mahouts and the poor elephants who’ve been taking captivated travellers up and down the hill all day. 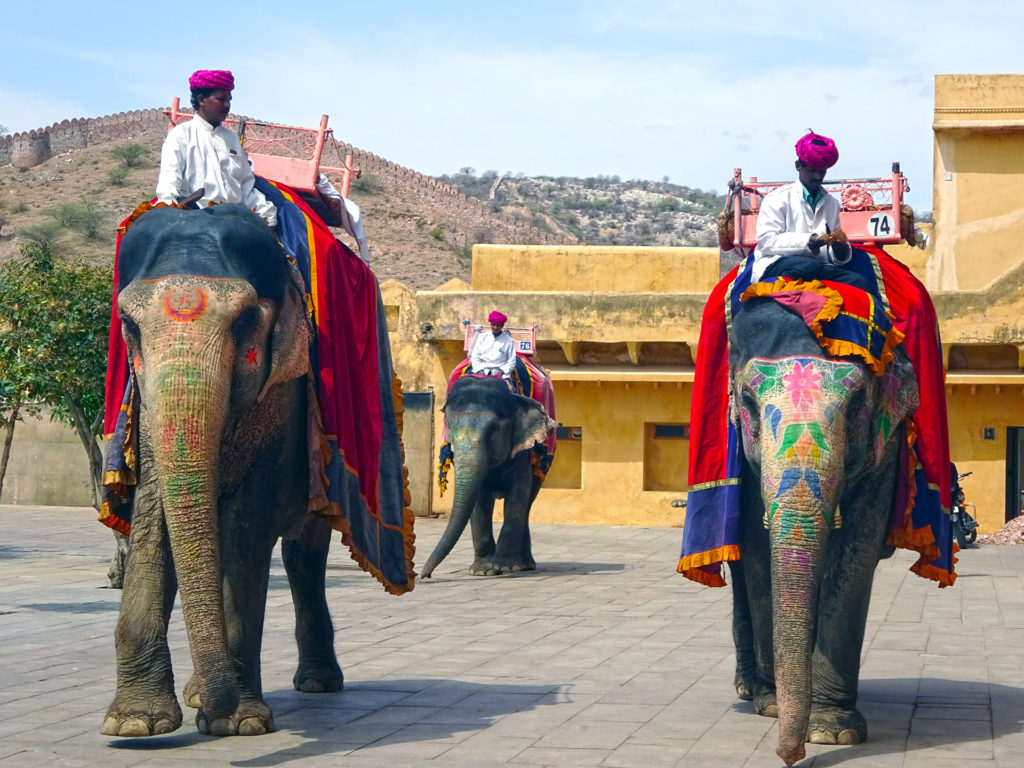 We see something called Panna Meena Ka Kund on the tourist map and an auto-driver takes us to it. Through tiny streets and massive potholes we bump our way to the deserted stepwell. It’s taken us by complete surprise – there are no entry tickets and exactly zero tourists. And yet, I’ve never seen anything quite like it.

The auto driver sees our ridiculous enthusiasm for this structure and pulls out a crumpled newspaper clipping of another, much bigger stepwell. We’re immediately interested, but it’s two hours outside the city of Jaipur and in the middle of no development – most definitely not doable by auto.

As the taxi cruises down the Jaipur-Agra highway to the village of Abhaneri, I reminisce about the snake charmer we saw in the busy streets of Jaipur. An actual snake charmer and an actual cobra with its hood up – keeping the India stereotype alive. I’m not sure how I feel about it.

Chand Ki Baoli is one of the largest stepwells in the country: 100 feet deep with 3,500 steps. Access to the bottom is blocked by railings that teenagers are trying to trespass. It’s 3-5 degrees cooler at the bottom and so the King held court in the big well in the ground.

The fantastic rainwater harvesting mechanism doubles up as an entertainment joint, where people came to socialise, perform, and have village meetings. There’s a King’s balcony and even an impressive water wheel to draw water up to the bathrooms. So far, this is the highlight of my trip! It’s absolutely stunning – its caretakers are vociferously proud of it. They watch the well all day and doze outside on stringy cots. 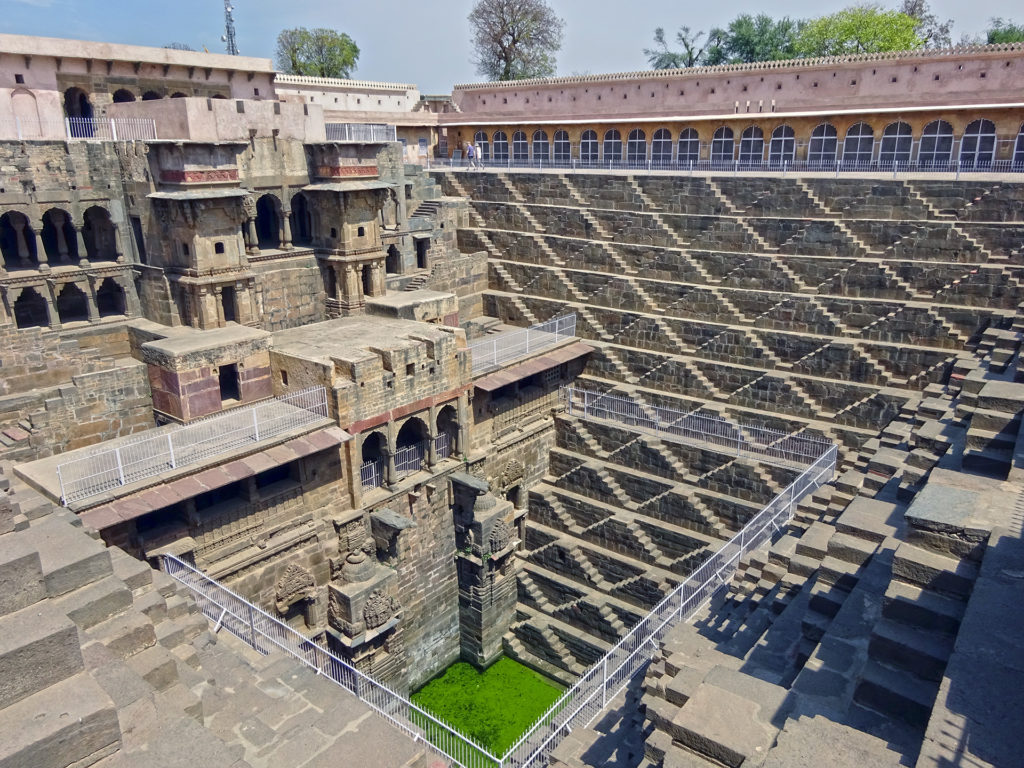 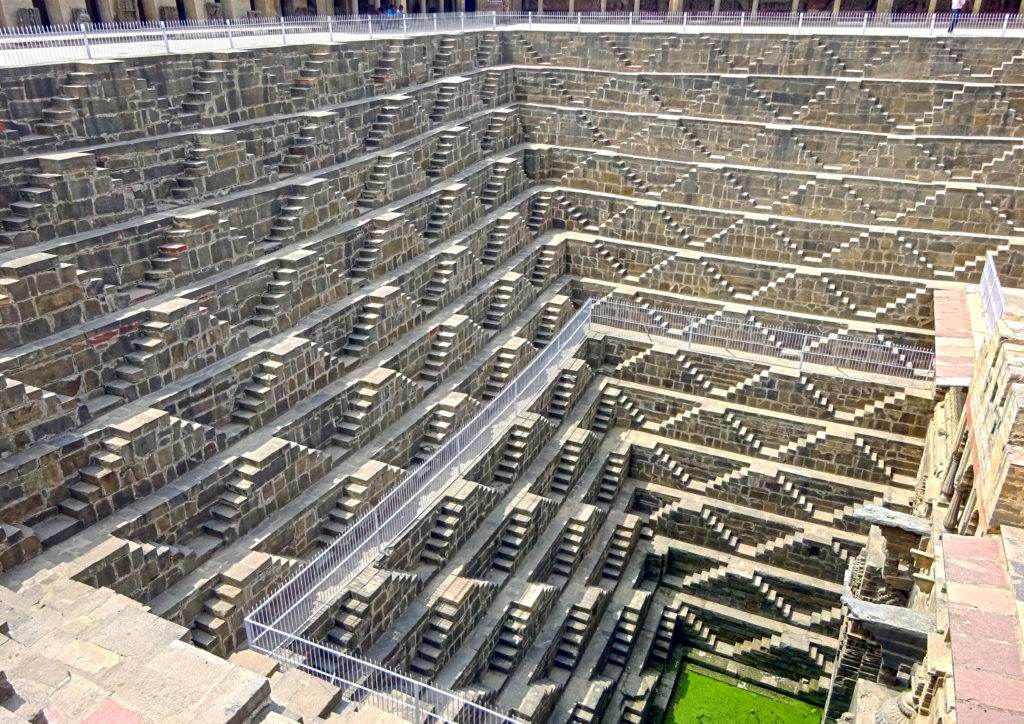 The sight that greets us when we step out stops me dead in my tracks. It takes a few seconds to process. It’s a group of nomads. You know, the stuff of legends, the lessons in geography books. The nomads of Rajasthan just passing by with all their possessions – camels, donkeys, babies, dogs, goats, and assorted household items. The women have their faces covered with brightly coloured ghoonghats and wear chunky white bangles from their elbows to their shoulders. The men don the classic Rajasthani turban and walk with the gait of seasoned vagabonds as they lead their convoy of domesticated animals through the dusty street. 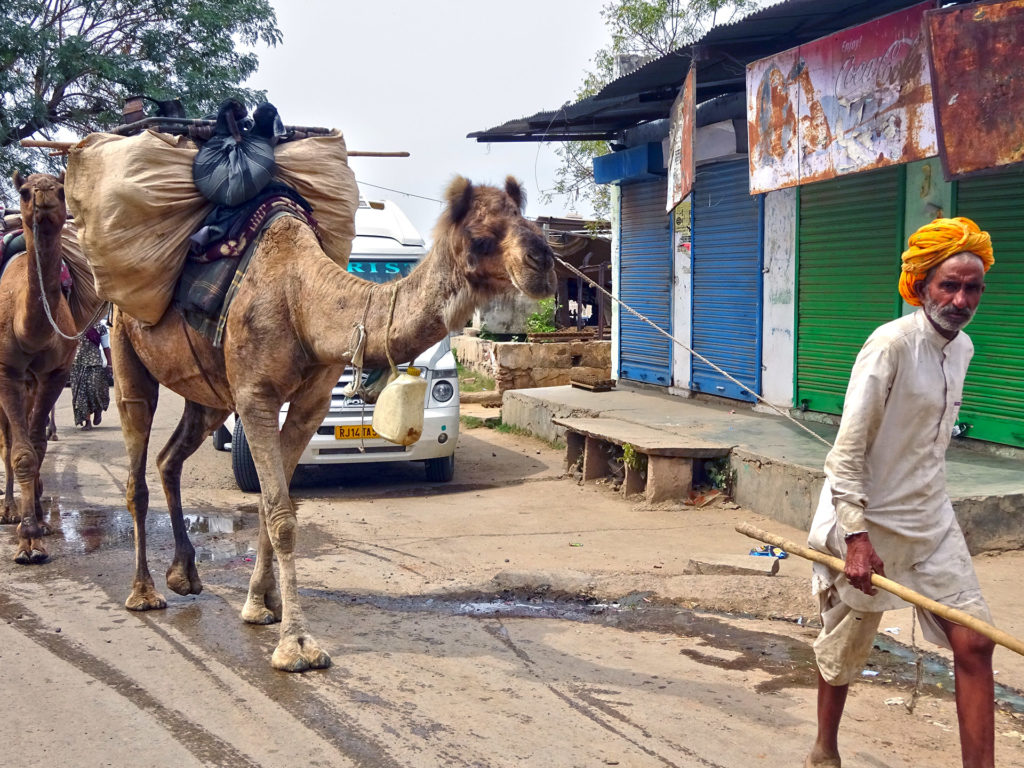 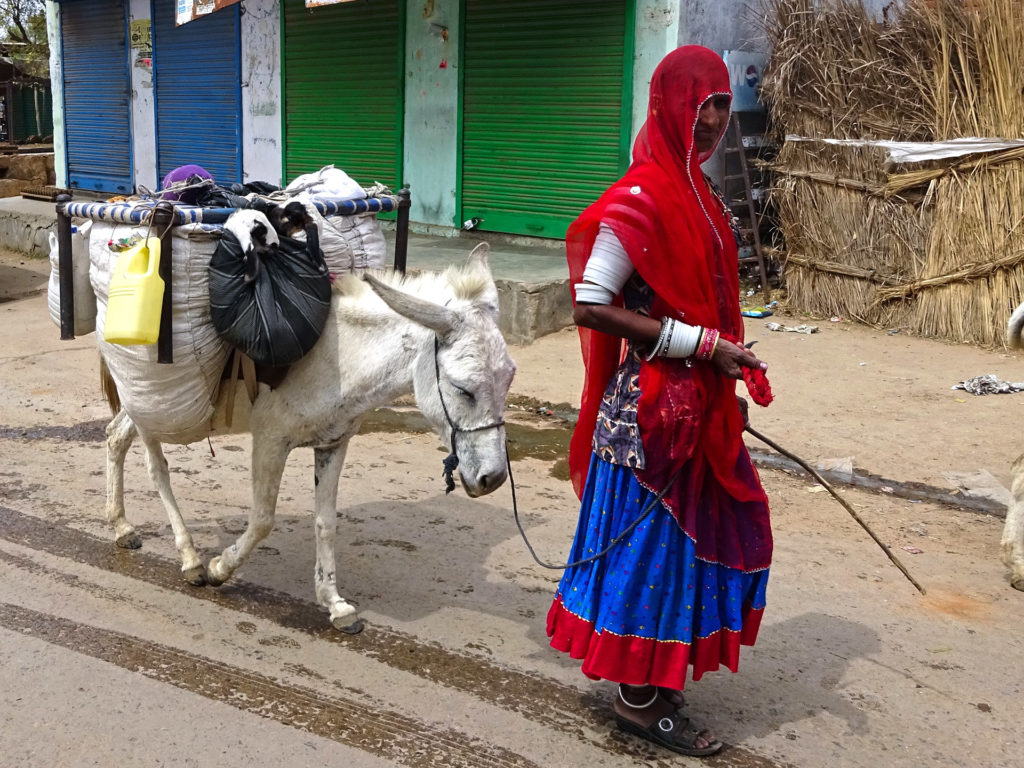 The donkeys sulk with the burdens they carry; I can almost hear them sigh. Then I see tucked into neat little bundles and securely tied to the donkeys – baby goats, baby donkeys and baby humans. I do a double take when I see the family dog also riding a poor donkey. The expression on my face sends a man into a laughing fit. He brushes his white moustache as he says to me in Hindi – yes, look at us with wonder, we are the colours of Rajasthan. I’m utterly fixated and watch mesmerised as the man disappears from view, with a baby camel with a knee wound in tow. 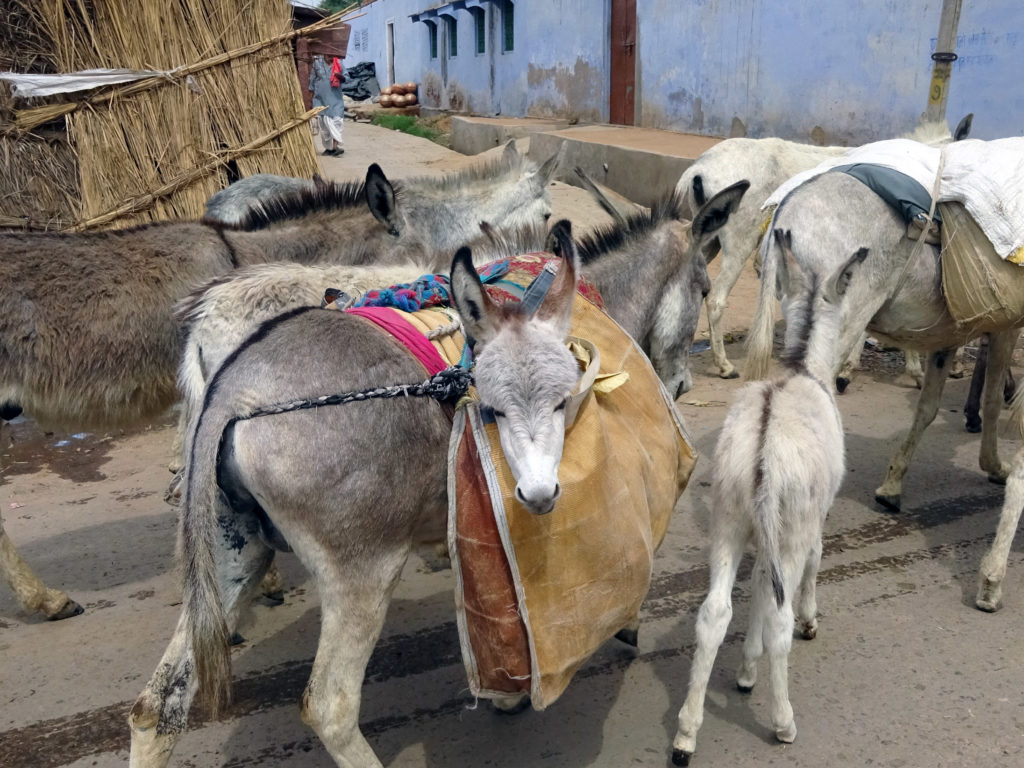 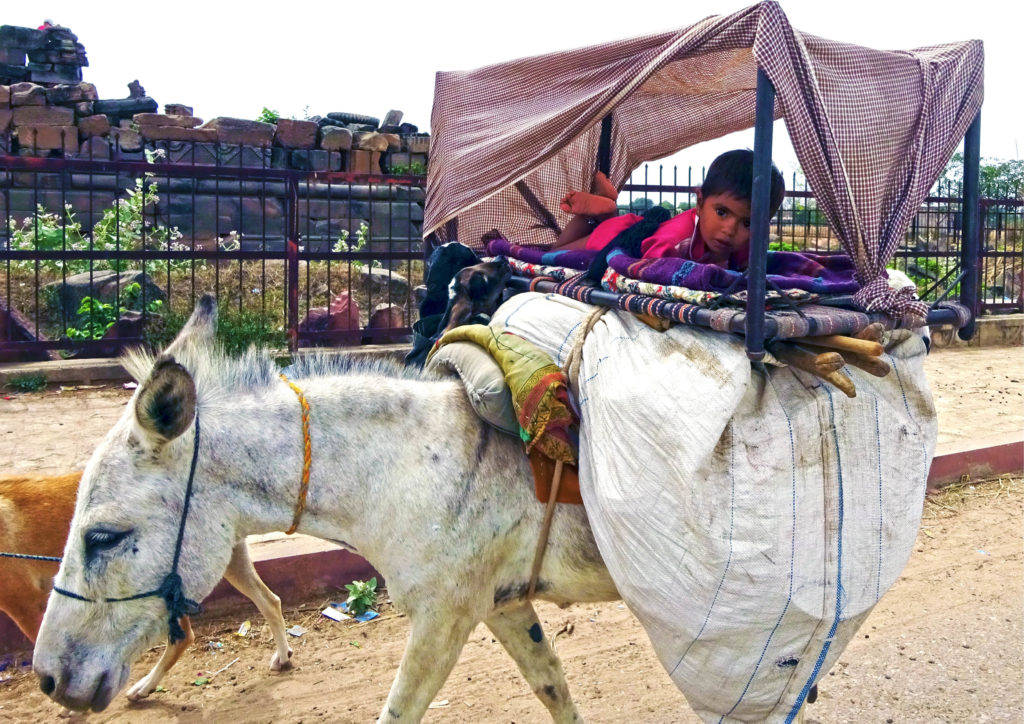 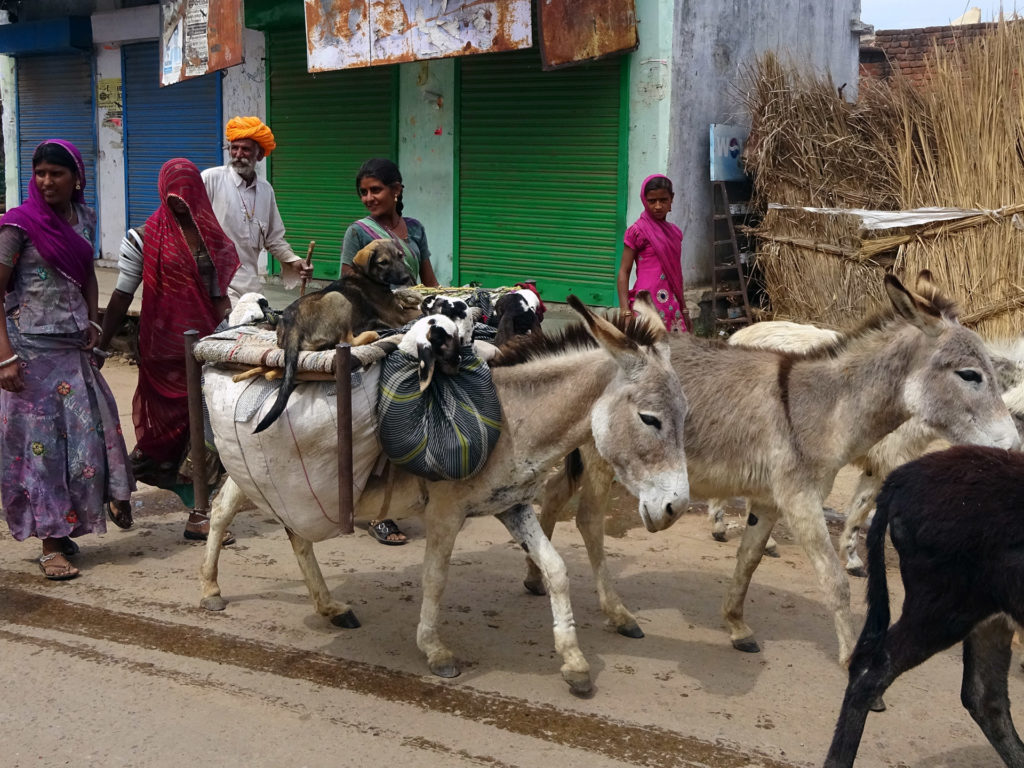 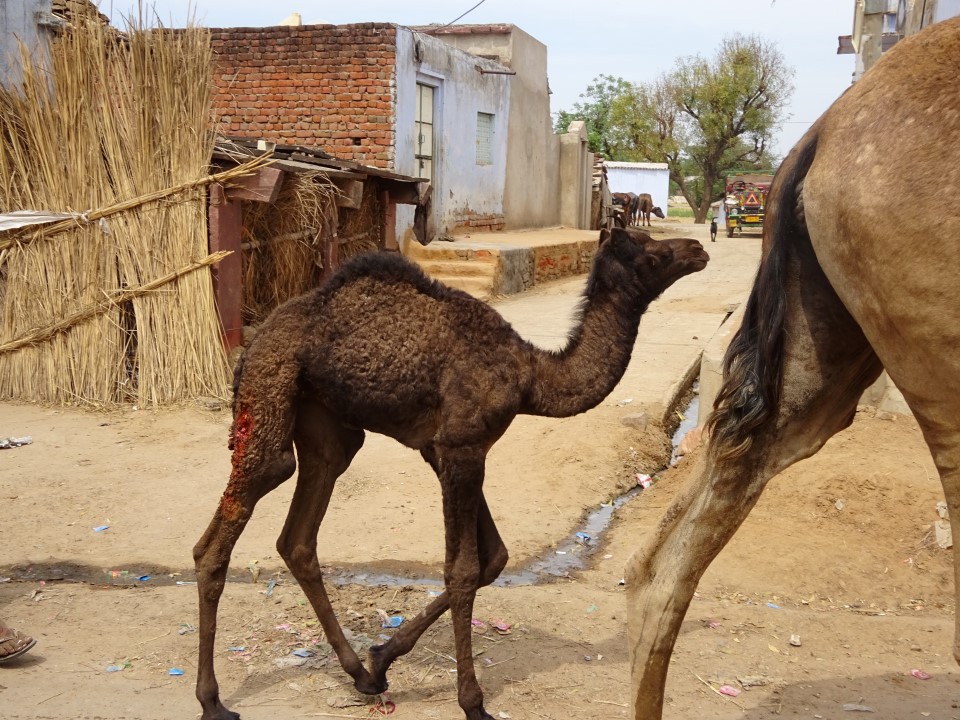 And then it hits me – this is a parallel India. Not different, not alternate, just parallel. An India where its people still wander from place to place in search of water and food. An India where owning a bike or a car is an alien reality and people rely on animals. An India that’s not looking at Facebook for life validation. An India that sleeps in the sand, that drinks from wells. An India that goes to sleep staring at the stars in the sky and not the ones on their iPhones.

I’m thinking back to Coldplay’s Hymn For The Weekend video and pondering the reasons we decided to be offended by it. I know now that it’s because we don’t see the parallel reality rendered in the song. Our digitally empowered lives don’t intersect with theirs and so their realities seem non-existent to us.

As we get back to our lives of air conditioned apartments and exhaust-filled roads, I send loving thoughts to the baby camel, deeply grateful for a new perspective on this larger-than-life country.

One thought on “A Parallel India In Jaipur”