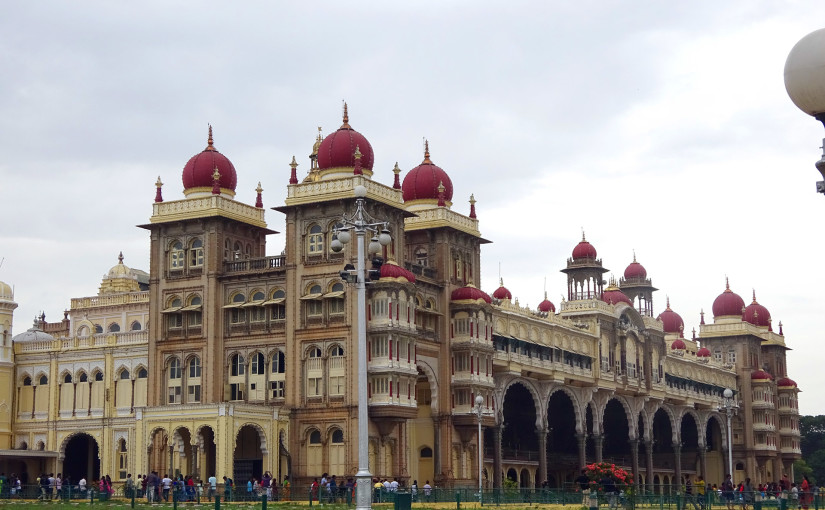 “What do you mean he was not your son? Who has all my clothes then?!” Our dear friends who were hosting us in Bangalore were dealing with a crisis. P had accidentally handed her best clothes to be ironed to someone who turned out not to be her ironing man’s son. While she stressed over if she’d given away her new M&S pants to an opportunistic thief, or donated them to someone asking for clothes, we decided to use the day to do something in Bangalore.

Every time I asked a Bangalorean what I can do when there they said – microbreweries, pubs, restaurants, and umm Nandi Hills? Imagine our delight when we found the Bangalore Palace – who even knew there was one?!

It’s located on Palace Road and is an oasis from the traffic chaos outside. You drive into a massive green estate to be greeted by a British-looking castle. We got an audio tour as part of the ticket which helped understand small things that would otherwise go unnoticed – like the fact that the pots on the stairs were custom made with uneven leg lengths to sit properly on the steps.

The interiors are filled with interesting stories about the many trials and tribulations of the royal family. The palace is stacked with paintings and artifacts that were either acquired during travels, or were gifts from aspiring friends. The palace does not spell grandeur like its Nizami or Rajput counterparts, but it’s a real treat to sit out in the garden and just take it all in especially if the weather is overcast and pleasant.

The next morning we took a slow 3 hour train to Mysore and slept through most of the journey. Mysore station is as chaotic as you’d expect it to be. We trekked our way to the hotel, luckily only five minutes away.

Apparently a thousand other people also had the genius idea of spending their Independence Day weekend discovering Mysore. We jostled to get our shoes to the dude at the stand and finally found our way in. The interiors are stunning – gold, jewels, silk, heavy drapery, carved doors, custom tiles everywhere. But like most tourist places in India, there’s very little context or information about what you’re seeing. You can get an audio tour, but good luck with the crowds!

The huge grounds means there’s plenty of opportunity to get some good pictures. My only advice? Leave your shoes in your car!

The Church of St Philomena

Built in 1936, this Catholic church is inspired by the Calogne Cathedral in Germany. It’s currently being renovated so the interiors are all covered in dust sheets. They do let you walk down through the catacombs which is a bit of an eerie experience.

This was the most unexpected display of sculpting skill I have ever seen. The artist has painstakingly created relief sculptures on mounds of sand. We walked around admiring the level of details captured in the many themes displayed. A must-see in Mysore!

Not to be confused with “Somnath Temple”, this temple is named after the town Somnathpura. One of the most incredible examples of Hoysala architecture, this well-preserved temple is about an hour’s drive from Mysore. It is enclosed within high walls that are a short walk through a green lawn. Because it’s made with soapstone, a much softer stone than granite, the details in the sculptures stand out.

There are three shrines in all with three gopurams. Each shrine is shaped like a 16-pointed star and every inch of the exterior is adorned with bands of relief sculpture, including in the recesses.

The interiors appear much smaller than the outside and every pillar is perfectly rounded. The guide tells us they used animals to pull a potter’s wheel, and got to work with chisels to create rounded pillars. Each shrine houses the sculpture of a deity – one of them a replacement as the original was looted along with jewels and other riches.

Fun fact – it took 58 years and three generations of sculptors to build!

This town is for the history buff. Once Tipu Sultan’s seat of power, Srirangapatnam has seen more than its share of wars and betrayal.

Before getting there we stopped at a driver-recommended ‘river’ to have our lunch of puffs and cake. We later realised it was a crematorium ground, but that didn’t take away from the scenic al-fresco dining! 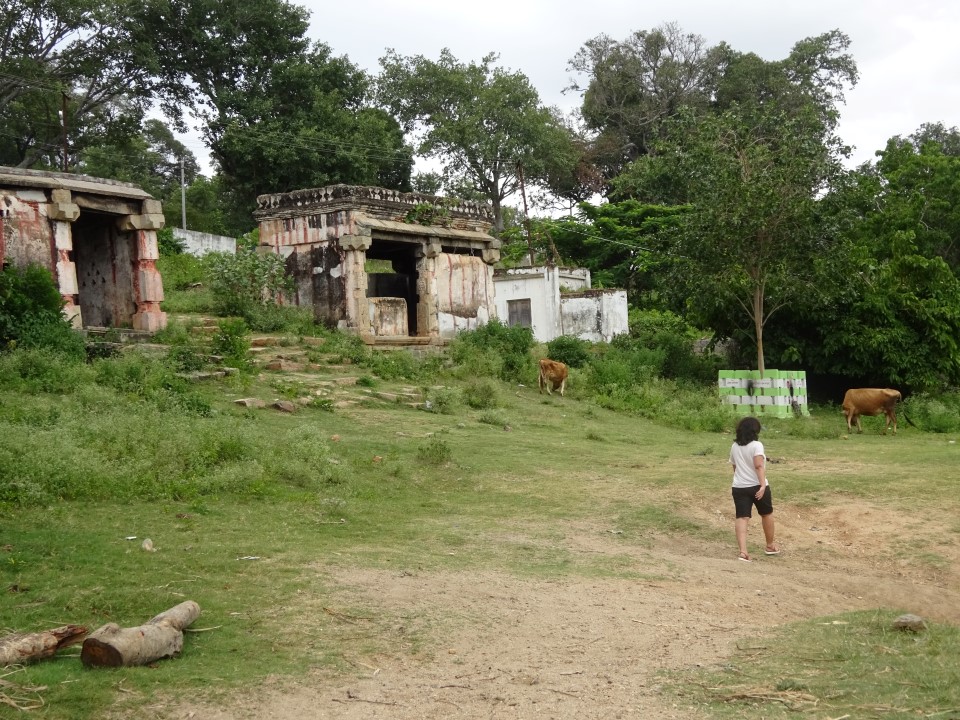 Srirangapatnam has it all – island surrounded by Cauveri, dungeons, forts, bombed palaces, temples, mosques, mausoleums. The spot where Tipu Sultan was found murdered is marked by a grave stone in a cordoned off lawn. A lot of the ramparts, gates and walls still exist, but there are no signs telling the fantastic stories. It’s only when we came back and read Bernard Cornwell’s ‘Sharpe’s Tiger’ we realised just how much history we had just visited.

This was the saddest part of our trip. The summer palace is a beautifully conceptualised structure and every inch of the interiors is filled with paintings and frescoes. Although they don’t allow photography inside (presumably to keep the flash from damaging the wall surfaces), it is kept in poor health and is crumbling from neglect. The sorry state of the palace is a shame, because the paintings inside are a unique way of preserving historic events.

Paintings of wars (Tippu and the French vs the British) are one of the best ways for us to learn of life at the time. What they wore, how they lived, what the uniforms were like, how royalty travelled. Written word simply cannot match visual historic depictions. People still happily run their hands across the walls when walking by (something that irks me to no end). It is most heartbreaking and I hope someday the summer palace will be restored to its original glory and the walls will be cordoned off.

Situated on the premises of the great Krishna Raj Sagar Dam, the Brindavan Gardens are green and clean with lots of water features that can keep children entertained for hours. You can go right up to the wall of the dam, but they don’t let you beyond that any more.

Before going to see the Sunday lighting of the Mysore Palace, we stopped at a popular chain restaurant for a filter coffee and dosa. Mysore masala dosas all around? “Err, I think they’re just called Masala dosas here. It’s like if you went to Punjab, you wouldn’t order Punjabi Chole, you’d just say Chole” chimed in my very helpful friend. No points for guessing what kind of dosa we got! Thanks, N!

The Mysore Palace lights up at 7pm for half an hour once a week, and entry into the grounds is free. We thought we were being clever by being there at 6.30. The line to get in was like the line at a ration store – people pushed and jostled and cut lines to get in so my advise is to plan to do the palace on a Sunday, go in at 4.30pm and stay there!

To wrap it up, we learned of gruesome war stories and dungeons where British officers were chained, never got to eat Mysore masala dosa, had the loveliest dinner at Oyster Bay (highly recommended!), and my friends never found out whom they gave their clothes away to.