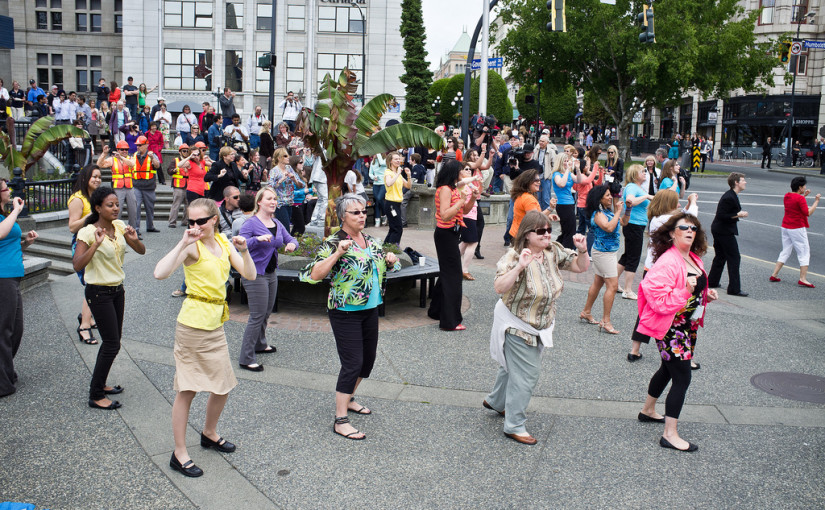 Everybody has heard about the flash mob at the Mumbai CST station. I watched it for the first time yesterday and it blew my mind! The official video is moving, you must watch it if you haven’t already.

So I did a bit of reading on flash mobs. Studying art for three years has opened my mind enough to completely understand why somebody would want to be a part of a flash mob. Creative expression, a compulsive need to tell yourself that there’s nothing that can stop you, a strong acceptance that it doesn’t matter if people don’t understand what you are doing. Just as long it makes you feel happy and you know you have found a medium to bring out what’s on your mind and in your heart.

It must take so much determination and self confidence to do something out of the ordinary. In March of 2007, a Manchester supermarket saw 50 people freeze frame for about 4 minutes. Stunning, really. Or the flash mob in September of 2008 where a bunch of pregnant ladies broke into a crazy dance routine in London to shed light on the poor conditions in which women in underprivileged parts of the world have to give birth to their babies.

An amazing flash mob in Mexico managed to bring together 13,957 people to dance to Michael Jackson’s Thriller. Or the one where over 20,000 people danced to Black Eyed Peas’ Tonight’s gonna be a good night! Thrilling.

The way I see it – Flash mobs = People Power.

Suddenly, it doesn’t matter where you’re from, how old you are, what caste or race you belong to, or which God you choose to worship. Suddenly, you are part of a group of people who decide to do something for no apparent reason, with no apparent result apart from sheer. Imagine what the world could achieve with this kind of power. If only we harnessed it.