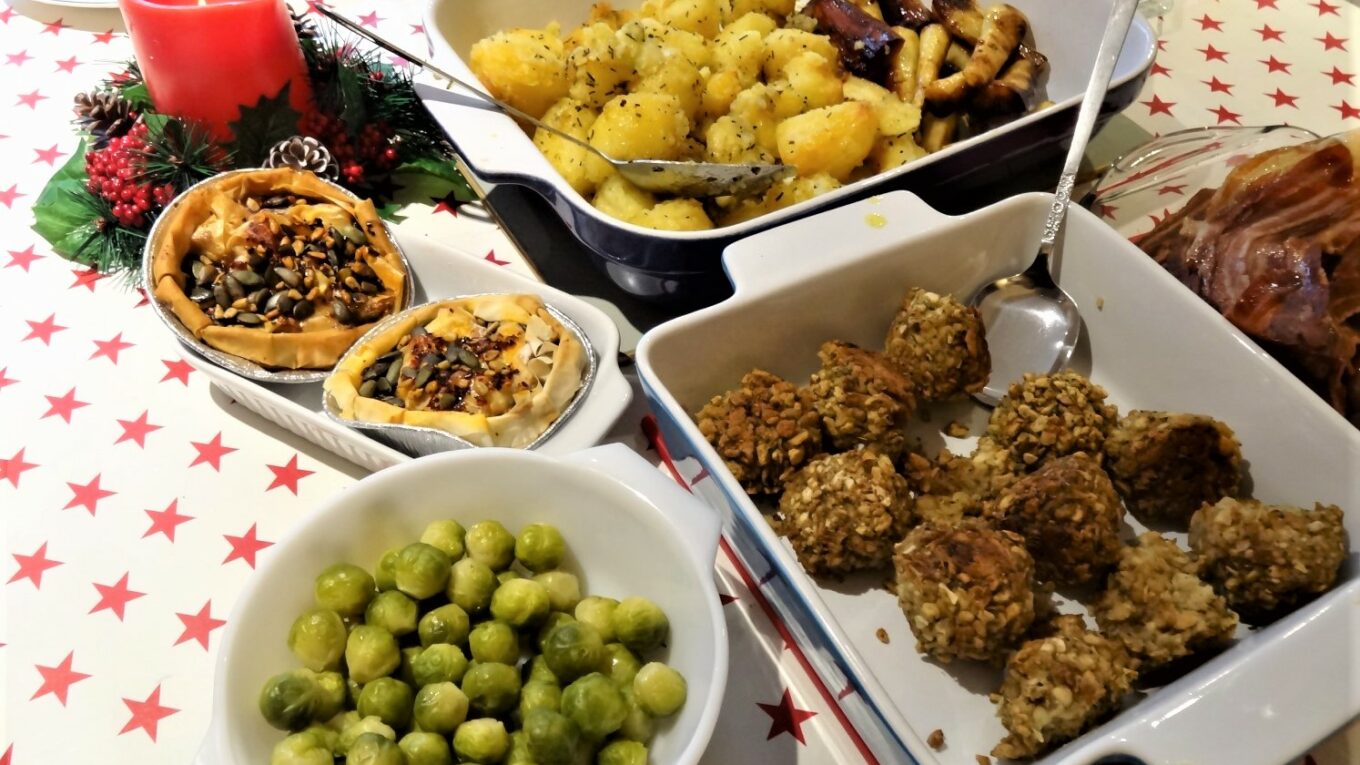 Cities in the UK are dotted with restaurants catering to the growing number of vegans, vegetarians, and “flexitarians” in the country – a movement encouraging people to adopt a mostly plant-based diet, with room for occasional meat. Travelling in the countryside however, is a wee bit trickier. Pop into a traditional British pub and your options are often limited to chips, margherita pizza, cheese and onion rolls, or a sad salad. Or the worst thing I’ve ever eaten – blueberry and goat cheese pie.

So when we were invited up to Market Harborough, a tiny town in the midlands to celebrate a traditional Christmas with the family, I braced myself for brussel sprouts, yorkshire pudding, and maybe some cake and custard.

“I could have roast potatoes!” I added to the WhatsApp group. “We traditionally make them with lard, which goes in yorkshire puddings too” texted my father-in-law. They must’ve felt a little bit sorry for me, because the next day I got a text to say a vegetarian Christmas pudding was being made especially for me, with brandy-soaked raisins, currants, cherries, apples, carrots, and almonds. I couldn’t bring myself to tell them I don’t really fancy Christmas pudding!

On the morning of Christmas eve, I woke up to the aroma of baked pastry wafting up from the kitchen. It was a special (vegetarian) breakfast of croissants, fruit and yoghurt, wholemeal bread toasted in the oven, and eggs. “How did you make these croissants, they are divine!” I asked, slathering on the butter and stuffing my face with them, hoping to be trusted with a passed-down family recipe. “It’s a secret, but I might tell you later.”

The family Christmas Eve dinner tradition has always been to enjoy a home-cooked lasagna, layered with a rich bolognese-style sauce, and topped off with a creamy bechamel. So of course I knew my dinner would be a cheese sandwich with some crisps, and a pot of hummus if I was lucky. “Or,” my in-laws suggested – “You could make us a curry? We usually have friends over, but they do love an Indian. In fact, we would call them curry-aficionados.”

And so a decades-long tradition was broken. Christmas Eve dinner was a muttai curry tempered with mustard seeds and karuveipillai, a baby-potato biriyani with caramelised onions, and thayir sadham. Mighty pleased with it if I may say so myself, and a whole new world of flavours and aromas for the residents of the street! My offer to swap out their china for banana leaves, however, was politely declined. 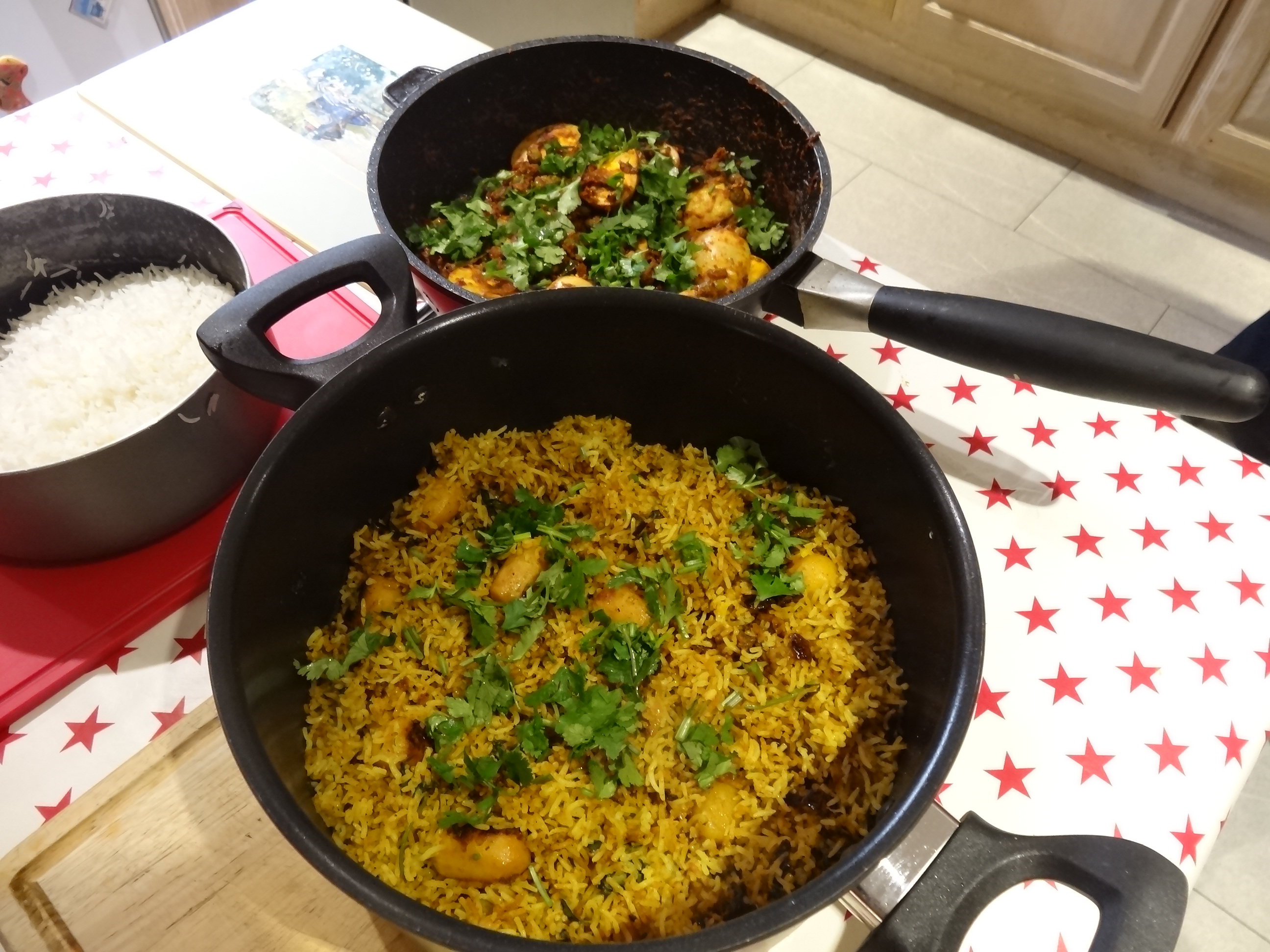 On Christmas morning I bounded down the stairs two at a time for Christmas-special pancakes breakfast, but was handed a coat and told to get in the car instead. “We’re going foraging.”

We drove to the family allotment, part of allocated pieces of farming land rented out to residents to grow their own produce. Now, there are degrees of madness, but my family must set new benchmarks. For there was not a soul in sight on the farm on the freezing Christmas morning, and a thick layer of steam was lifting off the frosted soil, with the winter sun raising the temperature to a couple above zero.

But my FIL and his mate Graham simply had to pick the freshest brussels and parsnips for their family dinner. “We like a frost over our parsnips before digging them out, it makes them sweeter,” imparted Graham, as he dusted the ice off his vegetables.

Who Invited the Vegetarian?

At 2pm the kitchen was buzzing, the counters filled with baking trays, serving bowls and wine glasses. The usually curious family cat couldn’t make sense of these many smells and decided to head out to chase birds and mice instead.

The meal started off with a clementine and cranberry bucks fizz, followed by a butternut squash, peppers and chilli soup. Garnished with fresh coriander leaves and croutons, it was possibly the most delicious serving of butternut squash I’ve had. The trick it seems, is in letting original flavours thrive without dumping in a load of spices. The meat-eaters dug into a starter of parma-ham, melon and grapes. Christmas crackers, trivia cards, mandatory dad-jokes, and a few more glasses of fizz later, our appetites were ready for main course. 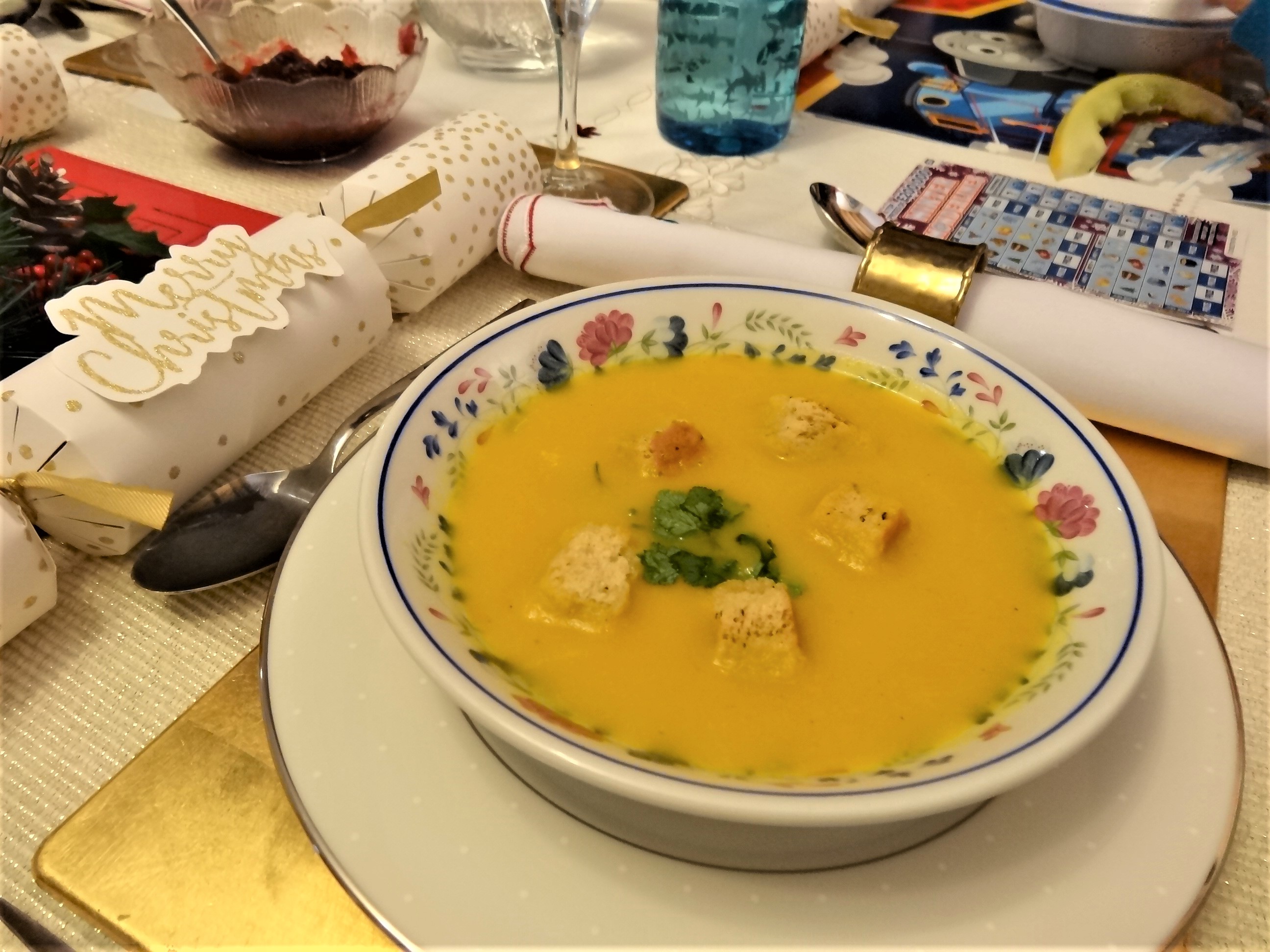 In what was a true shock, there was a total of 2 items I could not eat – roast turkey, and pigs in blankets. The potatoes were roasted in rapeseed oil, the parsnips glazed with maple syrup, the red cabbage braised with apples and butter. Traditional gravy was swapped out for onion gravy, yorkshire pudding replaced with carrot and swede mash, and crispy bacon bits left off the freshly-picked steamed brussel sprouts. Especially for the rabbit in the house, a cranberry and brie tart topped with pumpkin seeds made an appearance – the filo pastry crisp and golden. It may not have been Christmasy in any way, but the dish of cauliflower and broccoli baked in a sauce made with milk, cheese, stock, flour, chives and dijon mustard was a hit, even among the staunch carnivores!

For dessert, two look-alike puddings were topped with flaming rum, and served with a choice of cream, and brandy-cream. The vegetarian was made with faux-suet (palm oil, wheat or rice flour). “You’re going to finish this entire veggie Christmas pudding, aren’t you?” 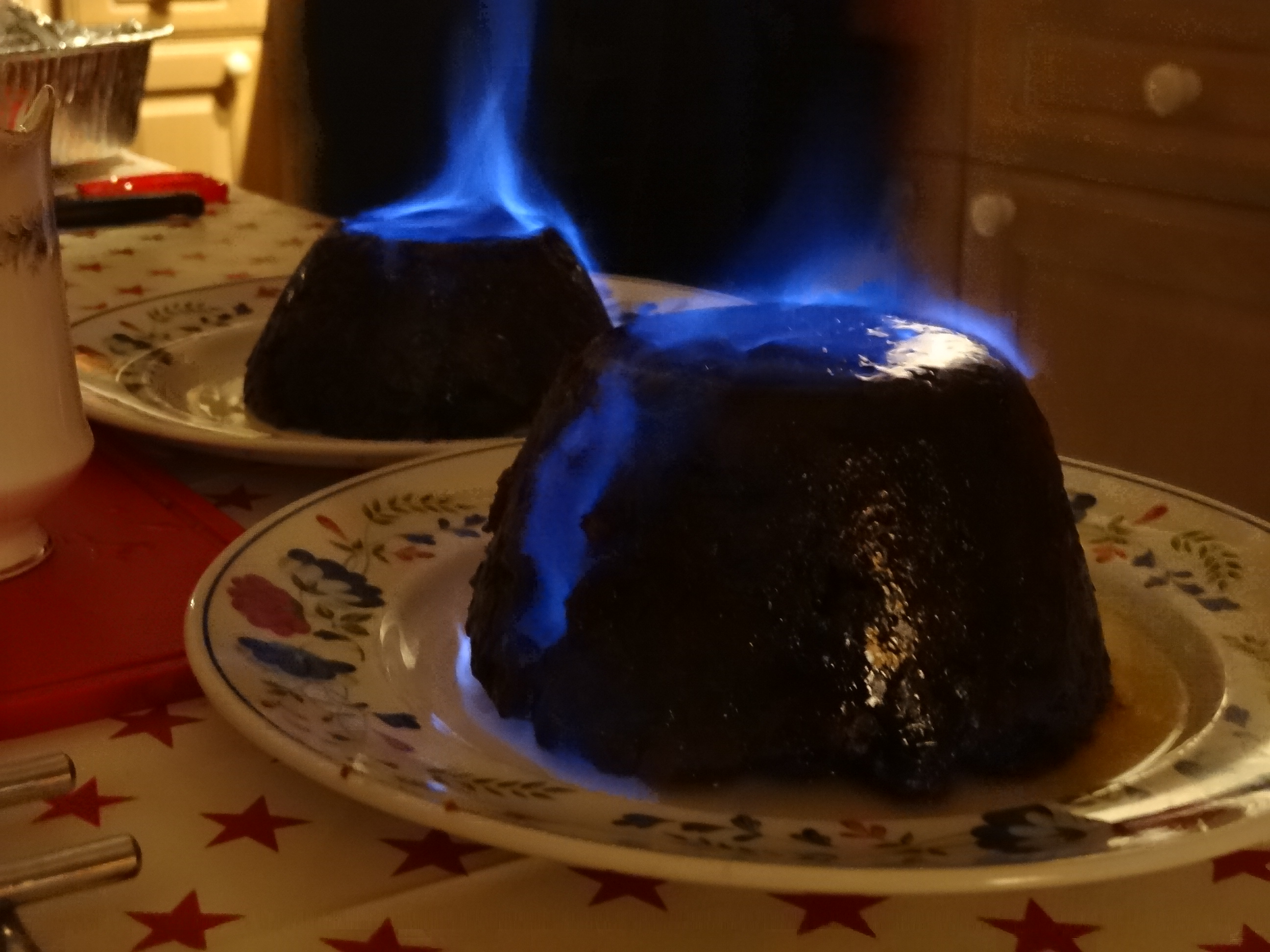 “Only if you tell me how you made the croissants,” I tried my luck.

“Well my dear,” said the FIL, “you will have to ask the chef at Waitrose.”