“The wooden hand she’s holding represents the life that’s been handed to her, the flowers reflective of her feeling one with their scents.” A young Italian visitor at the National Portrait Gallery quipped. In an attempt to woo his date with an extempore interpretation of a portrait, delivered with admirable confidence, he skilfully rattled on about the supposed symbology of the painting’s elements. His web lasted all of two minutes before he chuckled at his own ridiculousness and moved on. He didn’t really care for what inspired the artist, or so he claimed.

But other visitors and I listening in sniffed veiled interest – and that is what good art does. It engages the most sceptical viewer, sends the most closed minds wandering, asks questions, and evokes subjective interpretation, however far-fetched.

The National Portrait Gallery is in the 39th year of hosting its prestigious annual Portrait Award, sponsored by BP for 29 years now. This year, the gallery received 2,667 entries from 88 countries. These were then anonymously judged by a panel who chose three winners, and a selection of 48 for display at the exhibition.

A hyper realistic closeup of a young girl’s face greets you as you enter the gallery (Jesús María Sáez de Vicuña Ochoa). It engulfs you with its impressive detailing – every strand of hair, every nose freckle, her supple skin. Brushstrokes are invisible. She holds your gaze with a look of young curiosity.

Some of these artists showcase excellence in technique and skill, while others render their subjects in context of something deeper – a backstory, a purpose, a location, an emotion. A ballerina sits on her bed with one leg folded (Vanessa Garwood), a cheeky toddler crouches on his kitchen floor (Samantha Fellows). A defiant 5-year-old stands tall in royal blue (Neale Worley), a teenager sits shirtless in his cluttered room, studying (Chunchieh Huang). 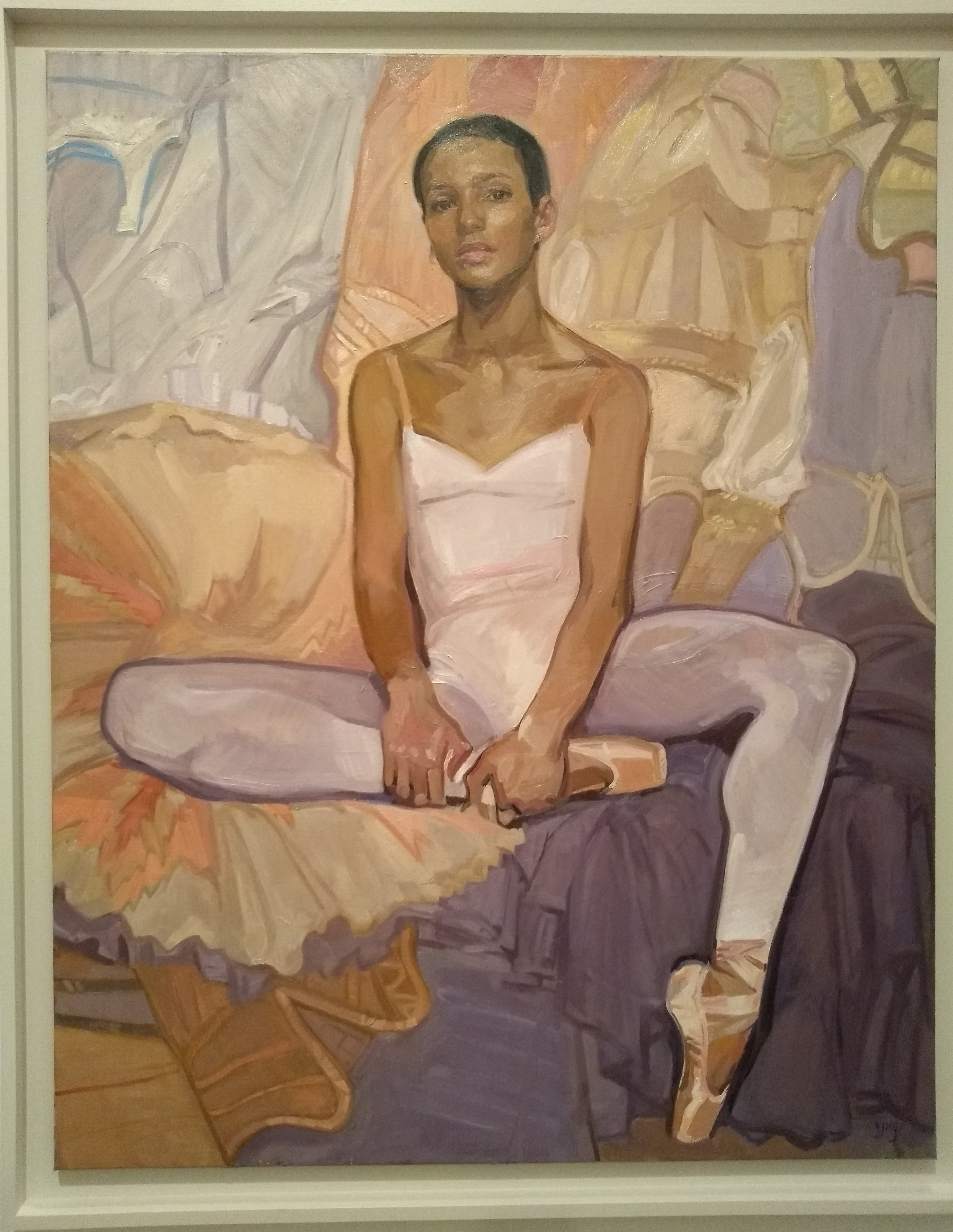 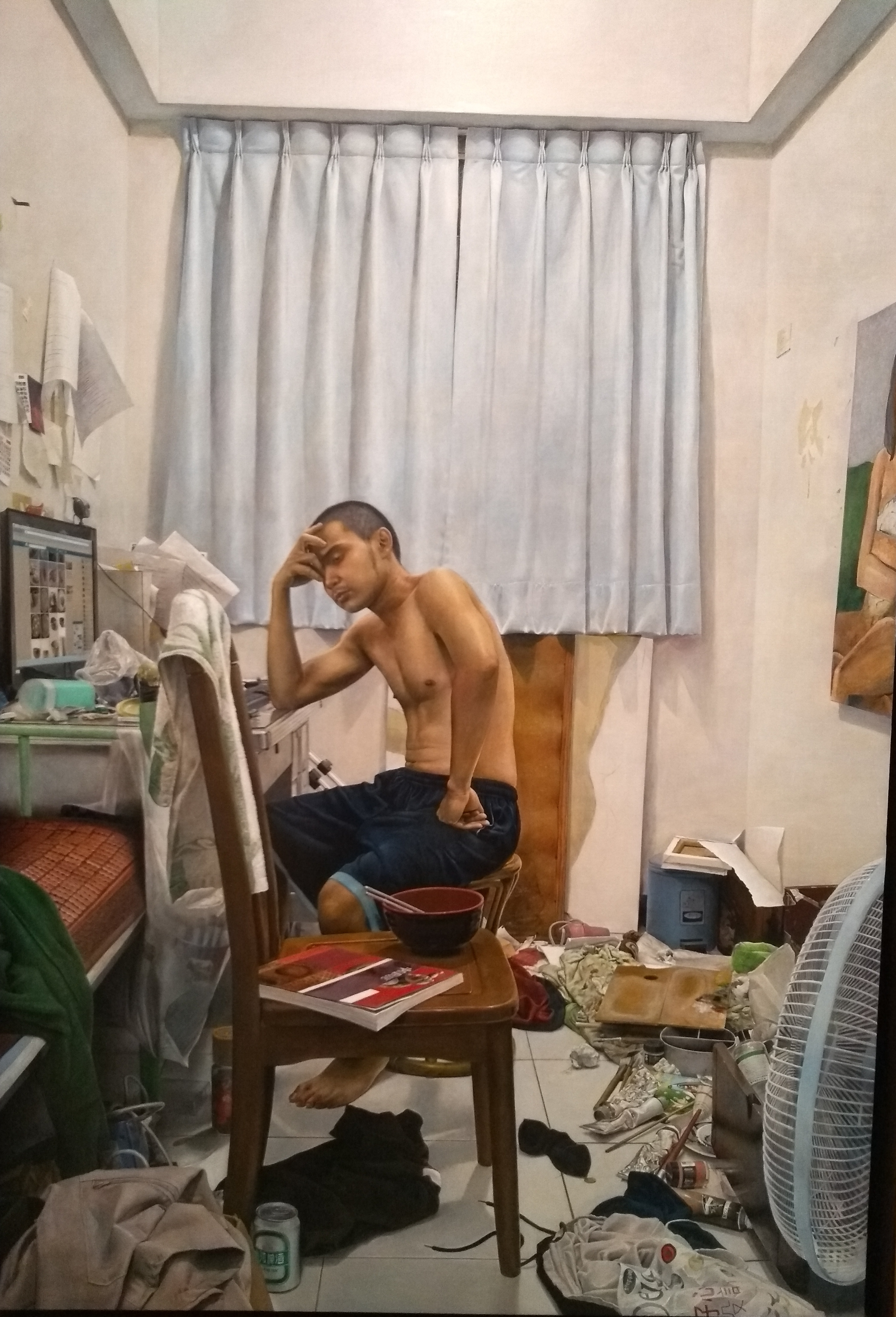 A stunningly beautiful girl in a simple black dress stands strong (Gaela Erwin), the light bouncing off her face and ballgown. A biologist examines specimens in his lab, rendered in chiaroscuro (Miguel Ángel Moya). Every painting introduces you to a new person with a story to tell. 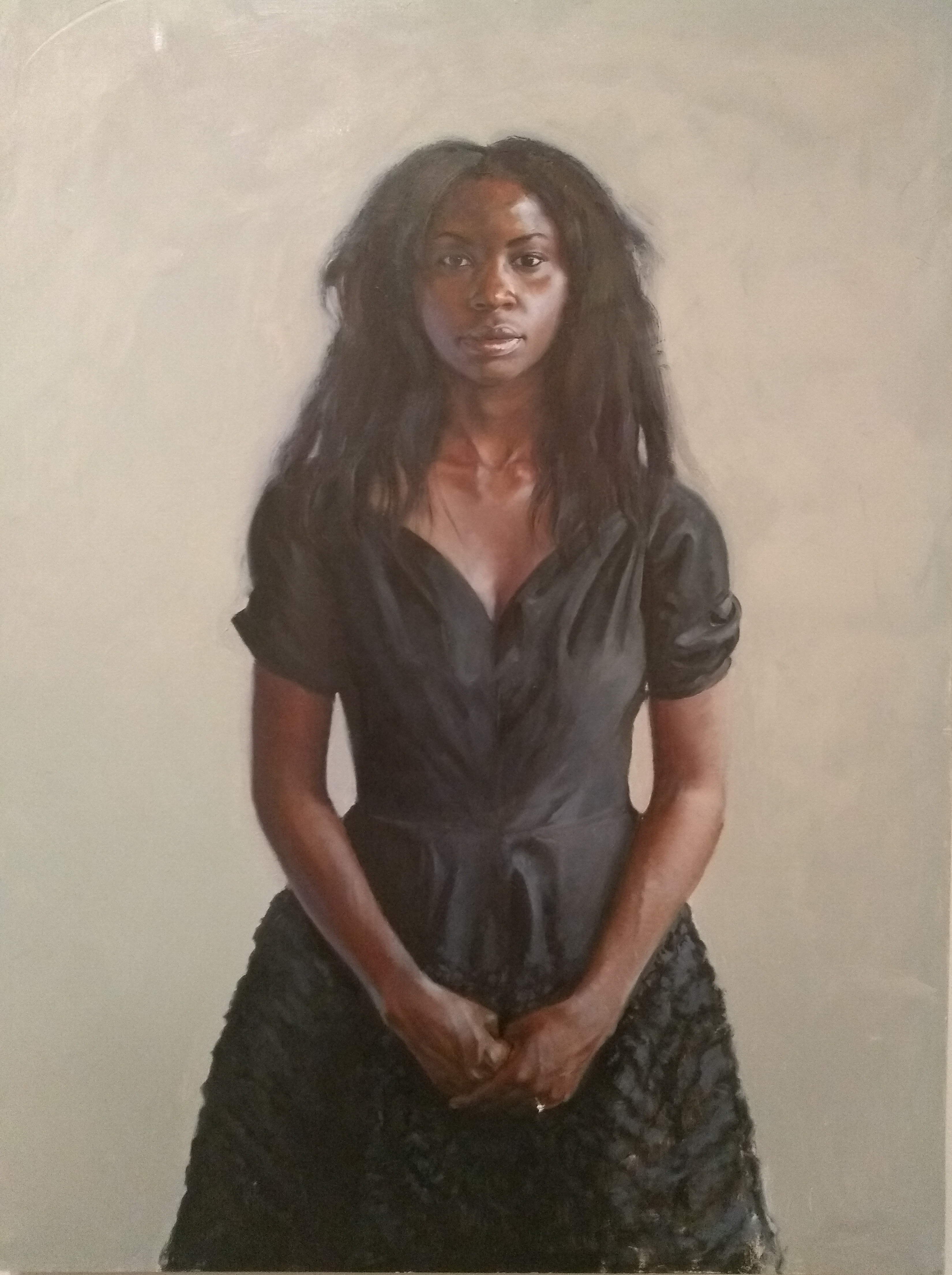 And then the bold and fearless face of musician Laura Mvula gazes out of her frame (Shawn McGovern), somehow both complementing the background, and challenging it at the same time.

The first prize of £35,000 has been awarded to Miriam Escofet for her piece An Angel At My Table. A surreal portrait of her mother, the painting instils instant calm. The greying lady sits at her table for tea, looking away from the viewer. You could spend hours gazing at the impeccable detailing – the artist’s colour palette and capture of textures most impressive. The softness of her hair, the silky drape of her outfit, and the polished smoothness of her ceramics. You want to sit down next to her at the table, pour yourself a cup of tea, and listen to her story. 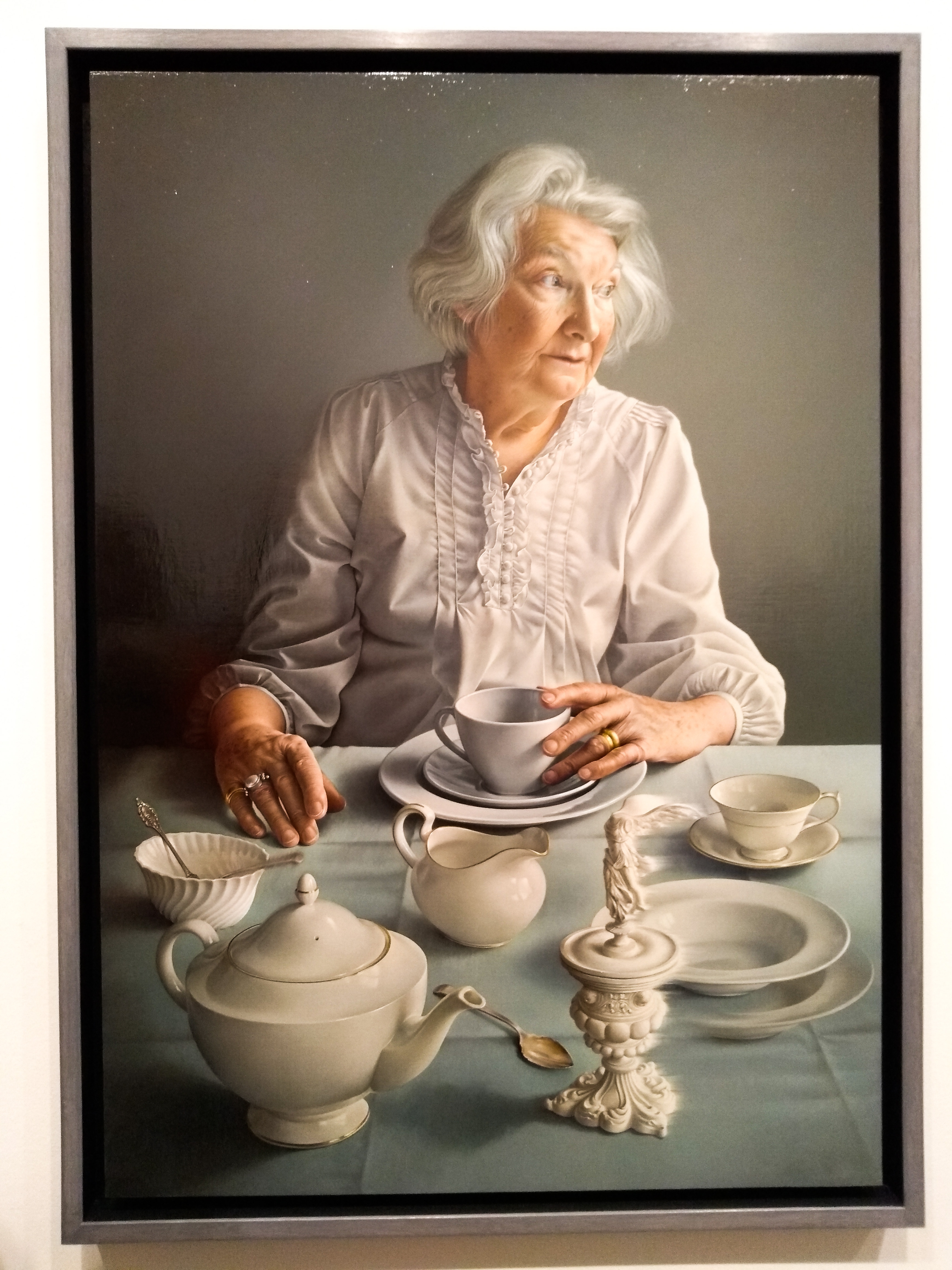 The second prize has been awarded to artist Felicia Forte for her portrait titled Time Traveller, Matthew Napping. The red jumps out of its confines as Matthew naps on a sweltering summer’s day in Detroit. 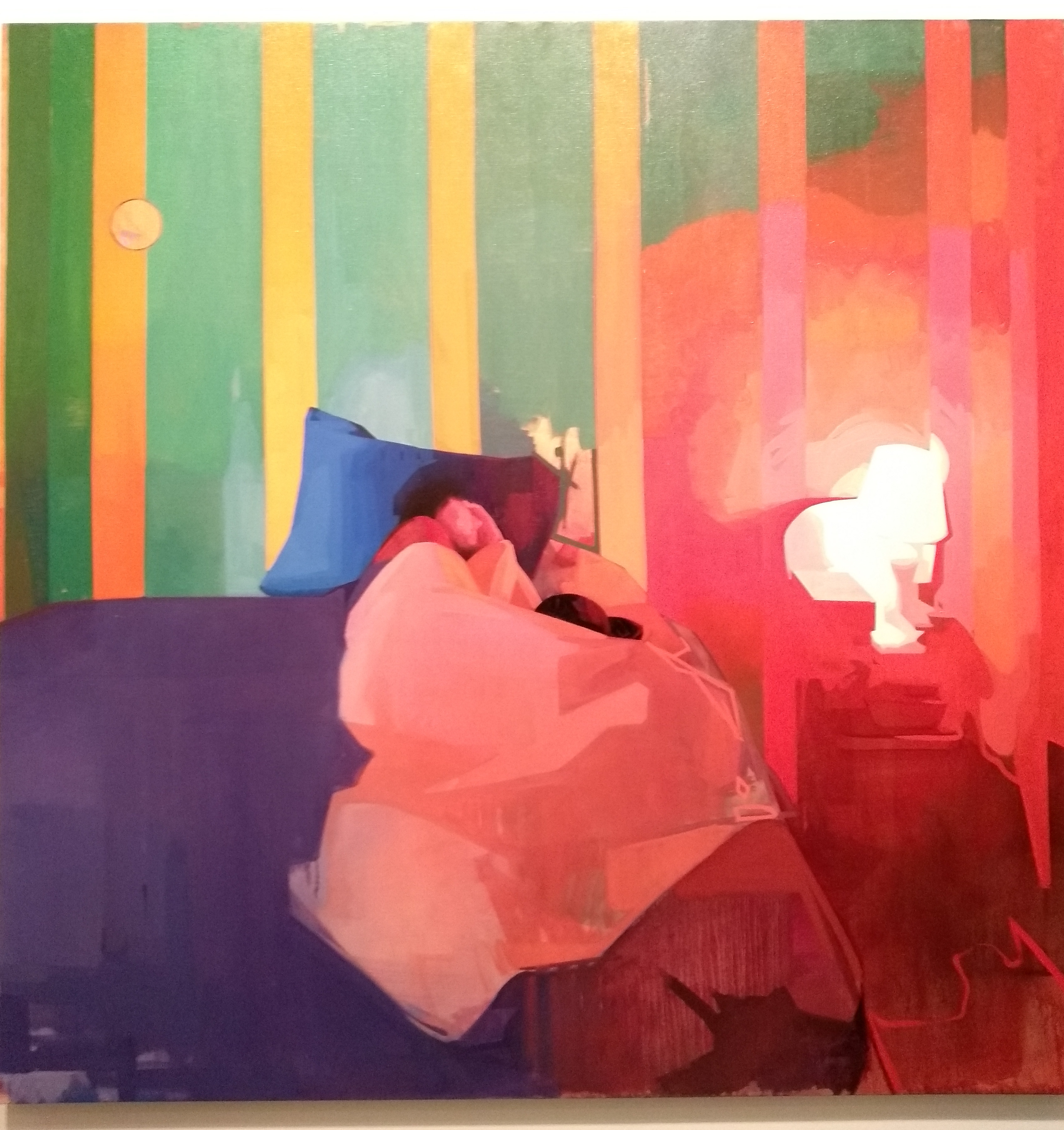 The winner of the third prize is artist Zhu Tongyao for his painting Simone – a joyful portrait of his neighbour’s child painted while he was studying in Italy. The gallery also presented artist Ania Hobson with the Young Artist Award for her work A Portrait of Two Female Painters, and artist Robert Seidel with a Travel Award for his capture of David.

As you exit the exhibition, a brave nude self-portrait of a young girl (Secil Guve) looks up at you from a bed of grass; free, empowered. A clever split-canvas painting of a middle-aged couple gone their separate ways sees you off.

One thought on “The Stories These Faces Tell”