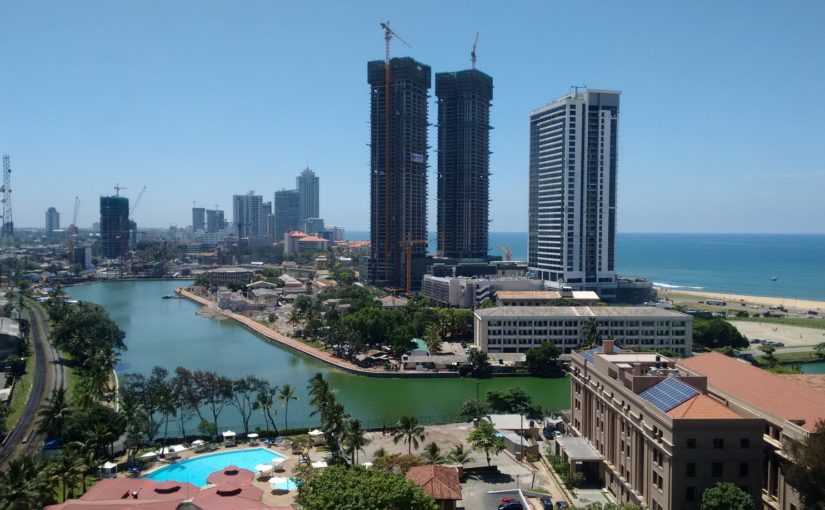 “This now looks like every other big city” was my first thought when we landed in Colombo. Over the last few years, the city’s cultural charms have slowly given way to modern skyscrapers and globalised aesthetics, at least in the financial and business districts. Perhaps appealing to investors and multinational businesses, its fading individuality makes the culture-traveller feel a tiny bit blue.

The Southwest coast of Sri Lanka offers an ideal break with plenty of interesting experiences. Here are 9 must-do things to add to your list for your next visit: 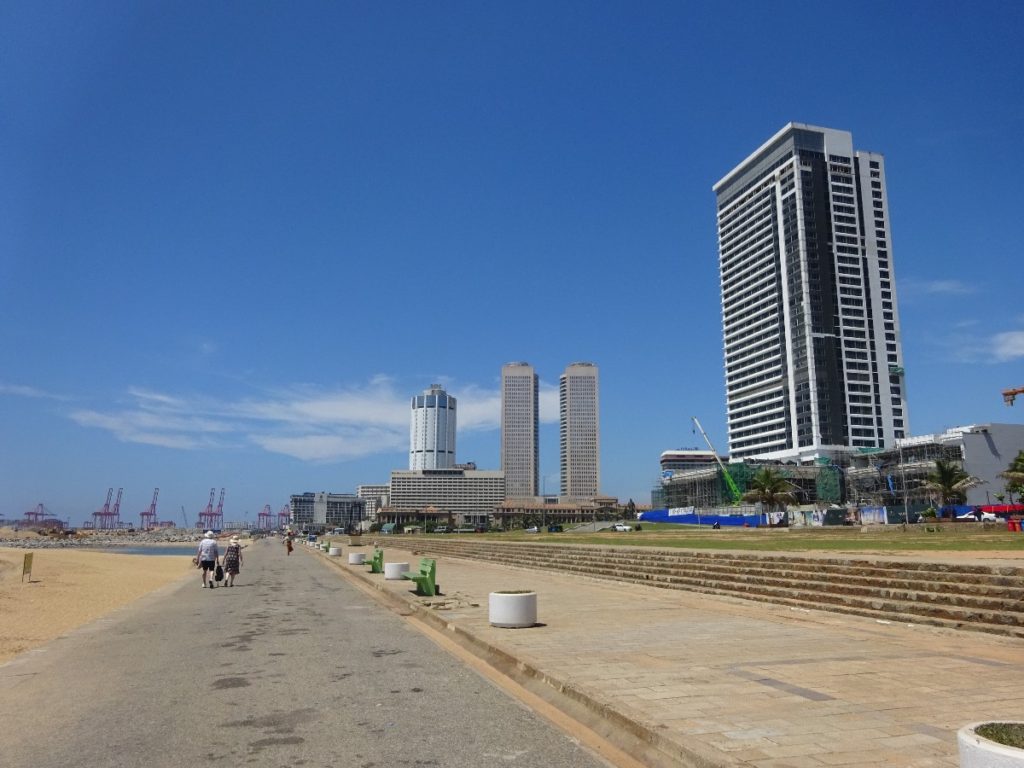 1pm may not have been the best time, but the walk along the Galle Face in Colombo was one down memory lane. We started at the Kingsbury Hotel, and walked up to the Galle Face Hotel, checking out the old Parliament and the pelicans on Beira Lake en-route. 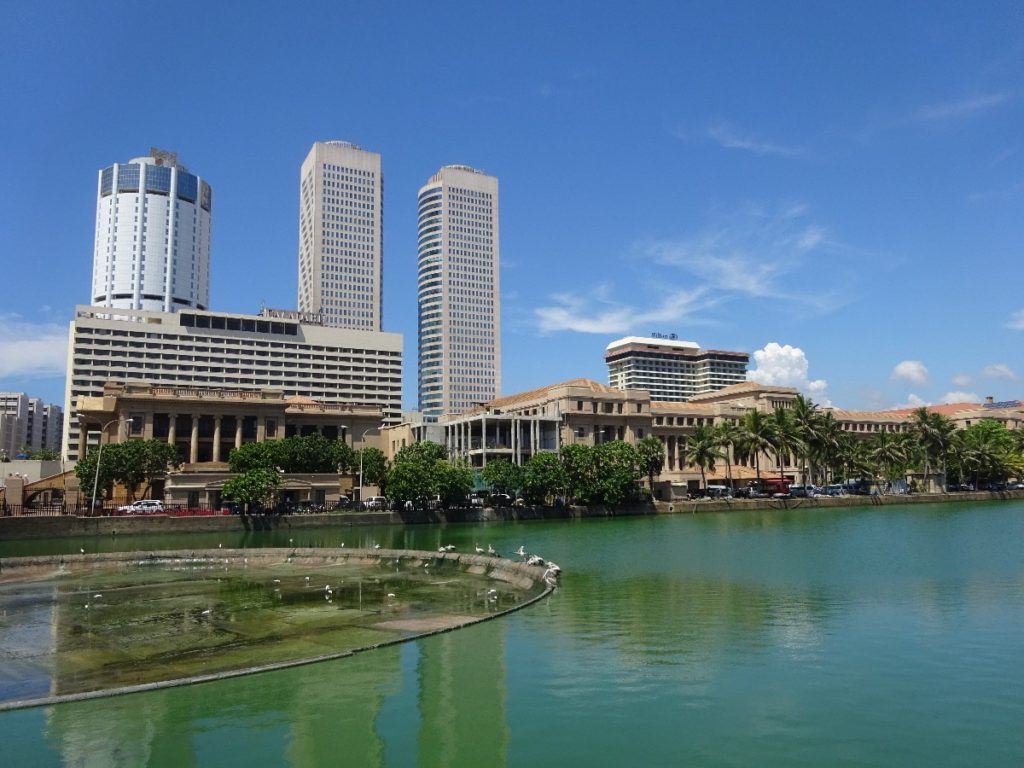 The stroll through what felt like a bustling construction site gave us the opportunity to identify all the new buildings that had appeared since we’d last been 3 years ago.

We watched the dredging to build the new Port City in progress, and observed the fish trapped in pools of water left by the receding tide. In the evening, the green offers a refreshing walk by the ocean and a delightful stretch to indulge in romantic rendezvous, while munching on snacks and beverages from the kiosks.

Have an Iced Tea at the Galle Face Hotel 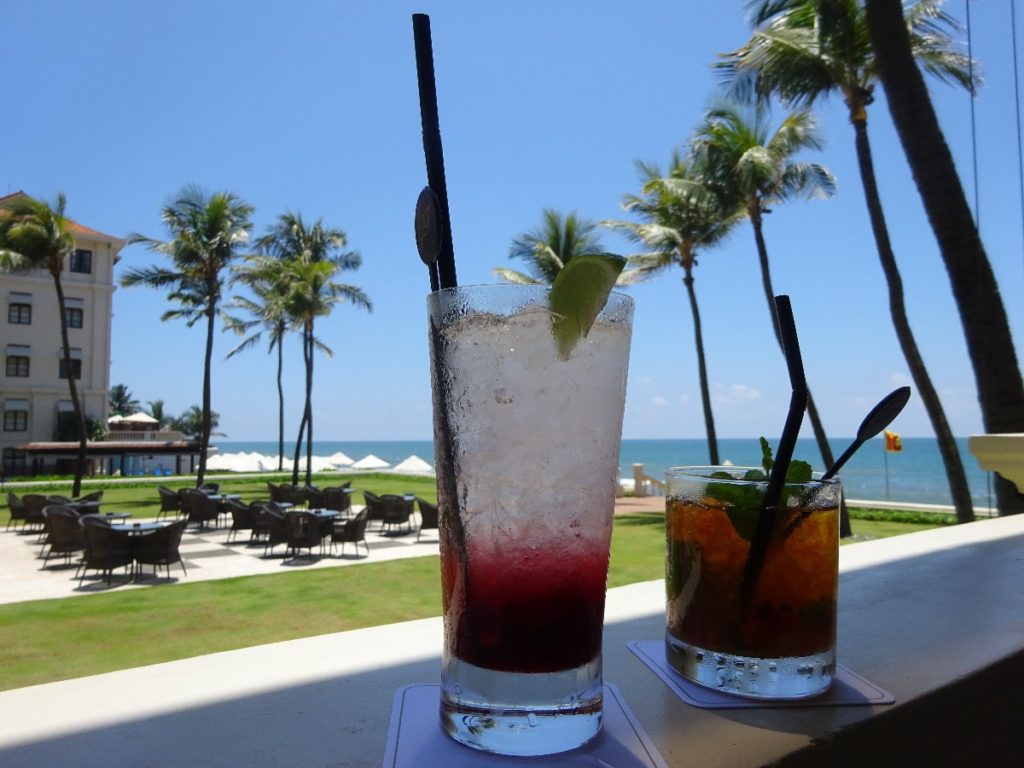 Overlooking the Galle Face Green is the iconic Galle Face Hotel, one of the oldest properties East of the Suez Canal. On our way in we spotted a bride in traditional attire rushing to the ballroom – every inch of her saree covered in magnolia beads, followed by her groom in a puffed sleeve coat and elaborate headgear.

We toyed with the idea of peeking into the decked venue, but found a comfy spot at the hotel’s Traveller’s Bar offering a view of the ocean and manicured lawns instead. 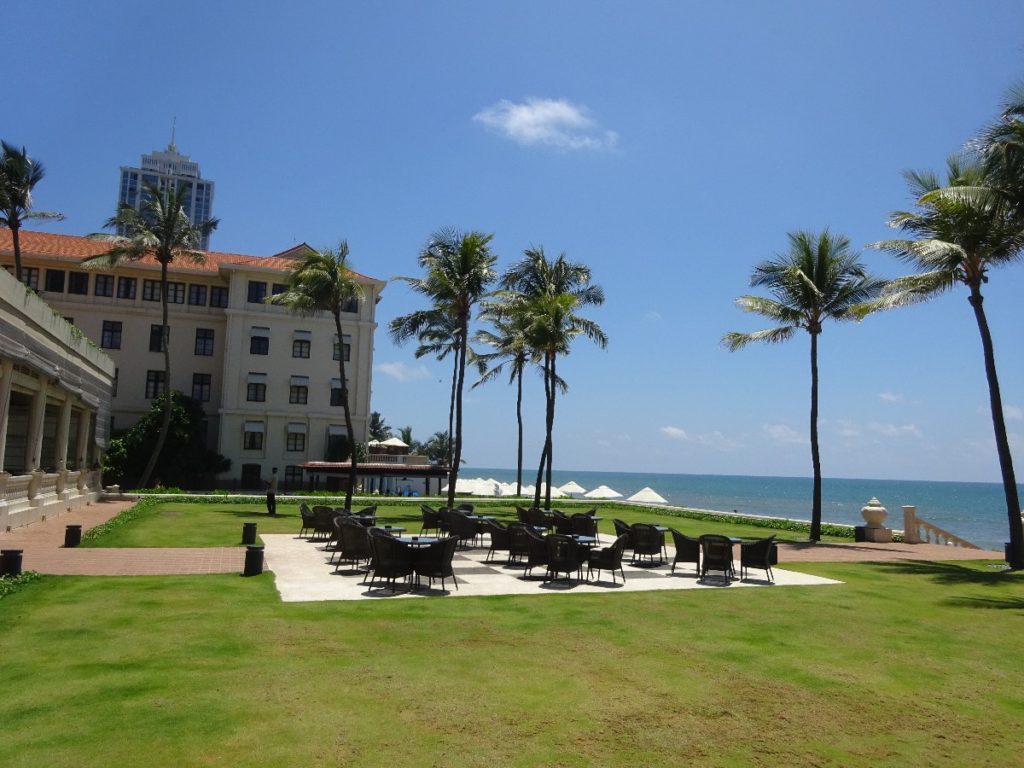 As we sipped the pina coladas and iced teas, we couldn’t help but feel a tinge of excitement knowing that the likes of Arthur Conan Doyle and Mark Twain sat in this very spot to be inspired by the Indian Ocean and the mysteries of Ceylon. Beverages start at around LKR 500. 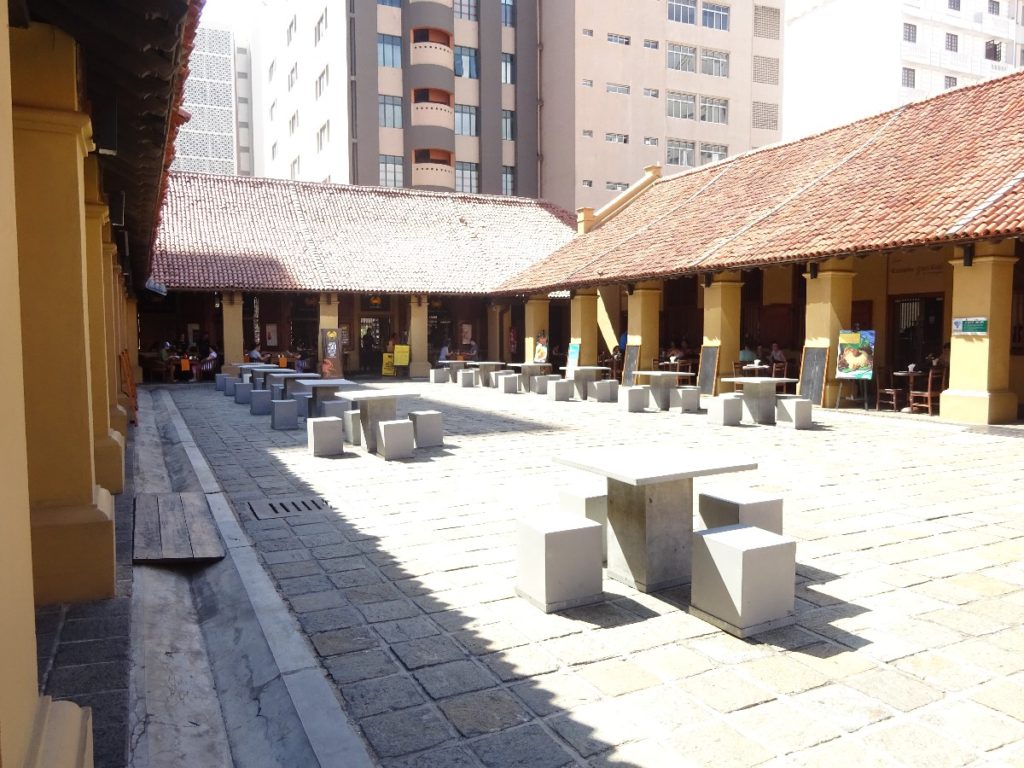 What served as a well-located hospital to treat seafarers and Dutch staff during colonial times, the Dutch Hospital opposite the World Trade Centre is now a heritage building that houses shops and restaurants.

The structure has indoor, outdoor and courtyard dining options. With excellent ratings, the Ministry of Crab is a must-do for seafood aficionados, but was surprisingly empty when we popped in for lunch.

We chose the Harpo’s Colombo Fort Café in search of vegetarian food and were immensely pleased with the creamy garbanzo hummus with warm pita bread, and tacos with fresh vegetables. Remember that between 2 and 5pm, these restaurants aren’t allowed to serve alcoholic beverages so we stuck to coffee and water. In the evenings, the hospital is popular among office-goers to catch up over good food and drink. You can also pick up souvenirs from the many boutique stores. 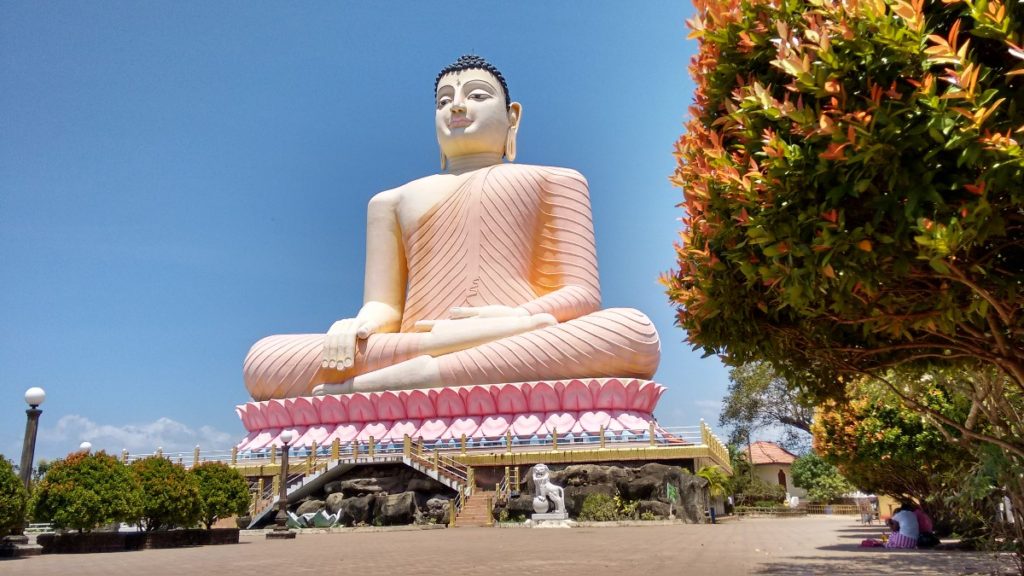 To get to Galle from Colombo, you can choose to drive down the highway, or take the longer country road. We chose the latter. About halfway to Galle is the town of Beruwala which has the magnificent Kande Vihara (meaning: mountain top) Buddhist Temple.

As we drove into the street, the giant serene face of the Buddha greeted us. At 160 feet, this is among the tallest statues of the sitting Buddha in the world. The campus is tranquil, green, and rich with history. Walk around to take in the peaceful vibes, and step inside to appreciate the frescos depicting various scenes from the Buddha’s life.

They only ask that you cover your legs upto your knees before you go in. Entry is free but you can make a donation to the temple if you wish. On-site residents also include a female and bull elephant.

NOTE: You cannot take pictures/selfies along with the Buddha – it is punishable in Sri Lanka. 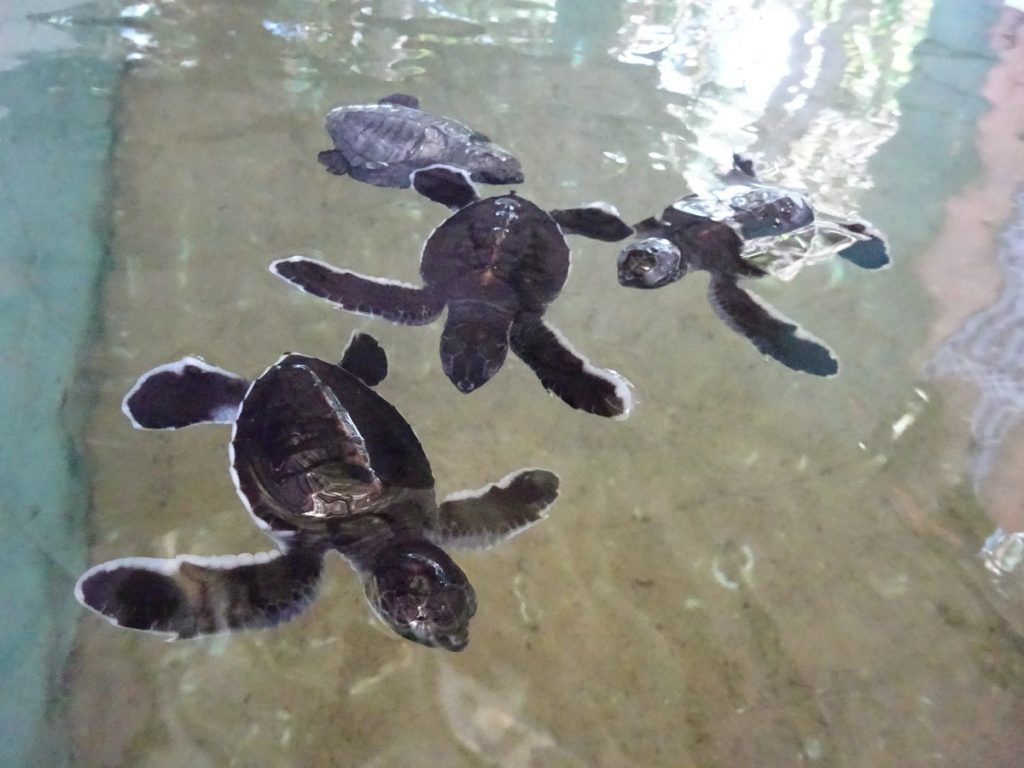 Along the coast are a few turtle hatcheries or conservation centres. At LKR 1000 per person, you can see day-old turtles awaiting release into the ocean. The centre we went to in Bentota was home to full-grown handicapped turtles that would never survive the ocean.

I felt so sorry for the one with a damaged shell, that I dipped my hand into his pond to stroke him, only to send the staff screeching at me to back off. “You are lucky to still have your fingers” I was told. Who knew turtles could bite them off?!

There were also Hawksbills, Terrapins, baby Olive Ridleys, Leatherbacks, Green Sea Turtles, and even the rare albino they lovingly called “Michael Jackson.” Despite seeing the great work they do, a small part of me couldn’t help wondering how much of it was about driving tourism rather than conservation. 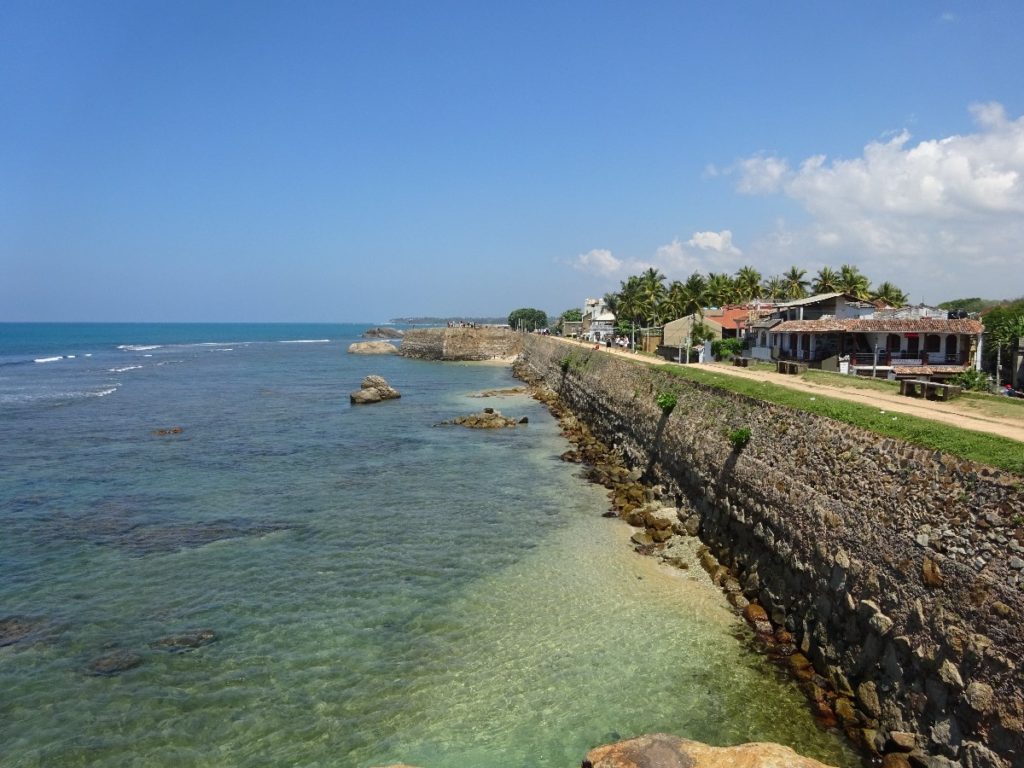 After 20 minutes of frantic searching, we were beginning to think the Airbnb we had booked didn’t really exist. But we did finally find it and could not have asked for nicer accommodation.

Checked in and showered, we headed to explore the Fort. The best way to do this is by walking around its perimeter. In just over an hour, you will see clear blue waters, old bastions and grass-clad walls built from sliced coral rock, canons, churches, mosques, Buddhist temples, lighthouses, clock-towers, beaches, cafes, shops, hotels, museums, monitor lizards and fishermen. 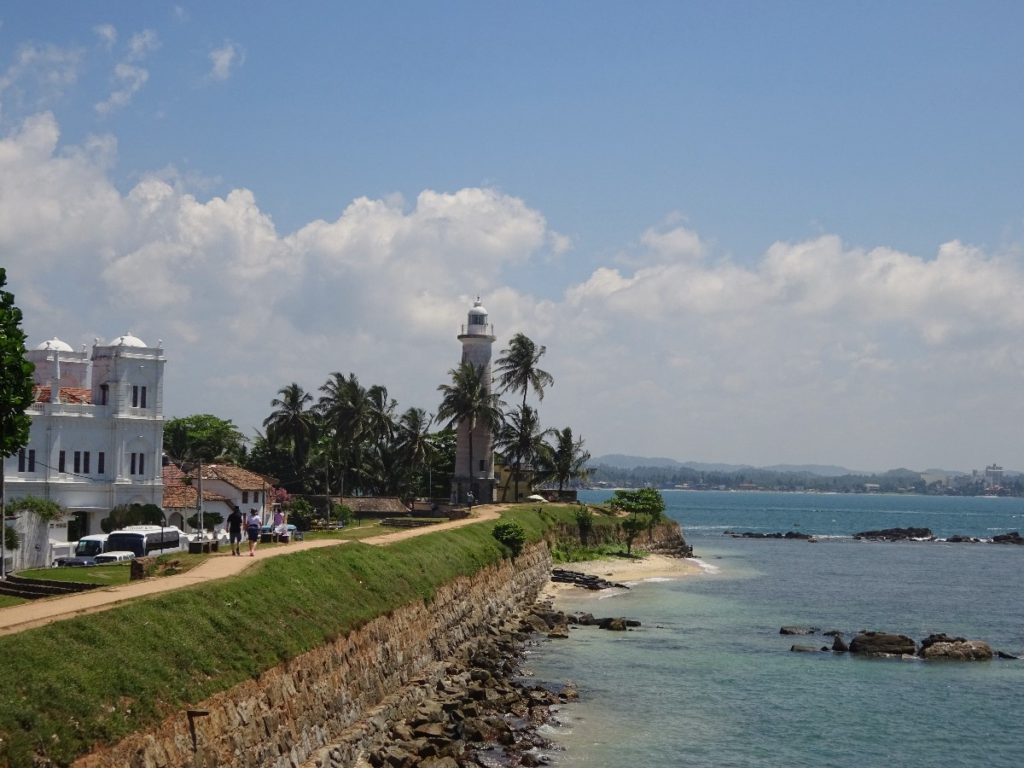 If you’re lucky, you may even get to watch a live cricket match at the stadium – we caught Sri Lanka vs Bangladesh! Also an old Dutch colony, Galle has a hospital which has been converted into a food precinct as well. Remember to buy unusual blends of tea here. 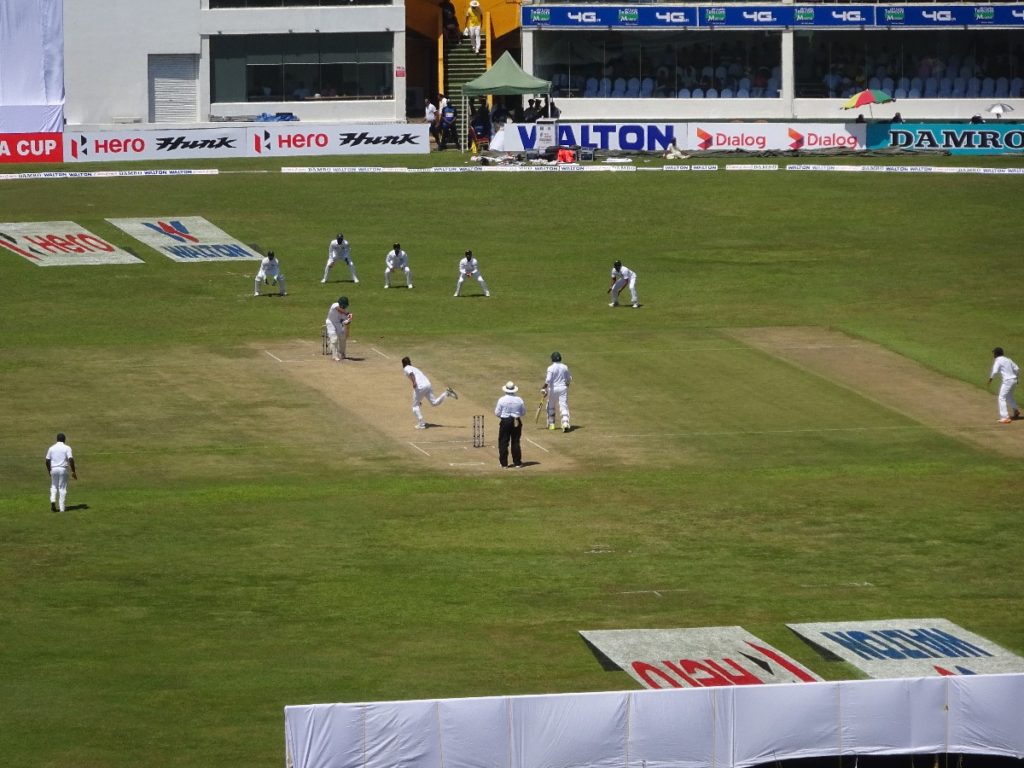 Have a Traditional Sri Lankan Curry

Most definitely the highlight of our trip, the Sri Lankan curry we had at the tiny Fort Dew restaurant opposite the Sri Sudharmalaya Buddhist Temple left us licking our fingers and wanting more.

“It’s going to take an hour to make all the curries” the waiter warned us, but we declined his offer of cheese sandwiches. So while the chef made fresh from-scratch creamy curries for us, we waited impatiently for what was undoubtedly one of the best meals of our lives. 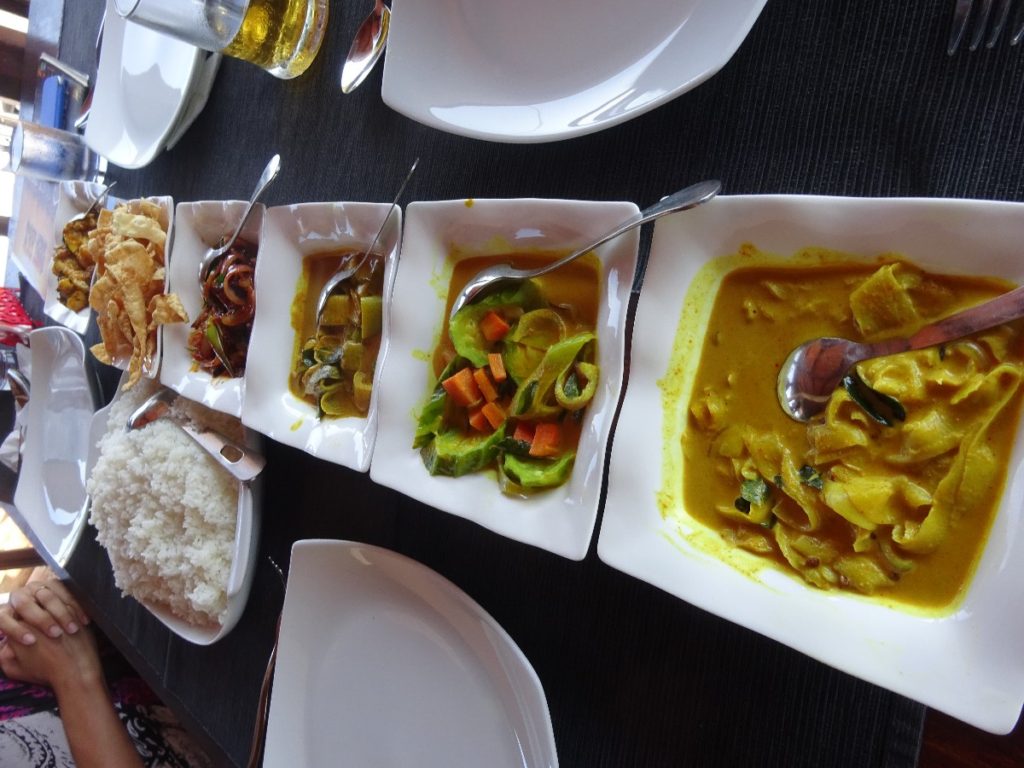 Five different gravies served combinations of cabbage, leeks, spicy potato, tender chicken, carrots and a whole lot of flavour, with hot white rice and fried appalams. There simply isn’t a better way to spend an afternoon in Sri Lanka. It is now my hope to someday learn the nuances of the cuisine from a Sri Lankan expert.

Catch the Sunset over the Indian Ocean 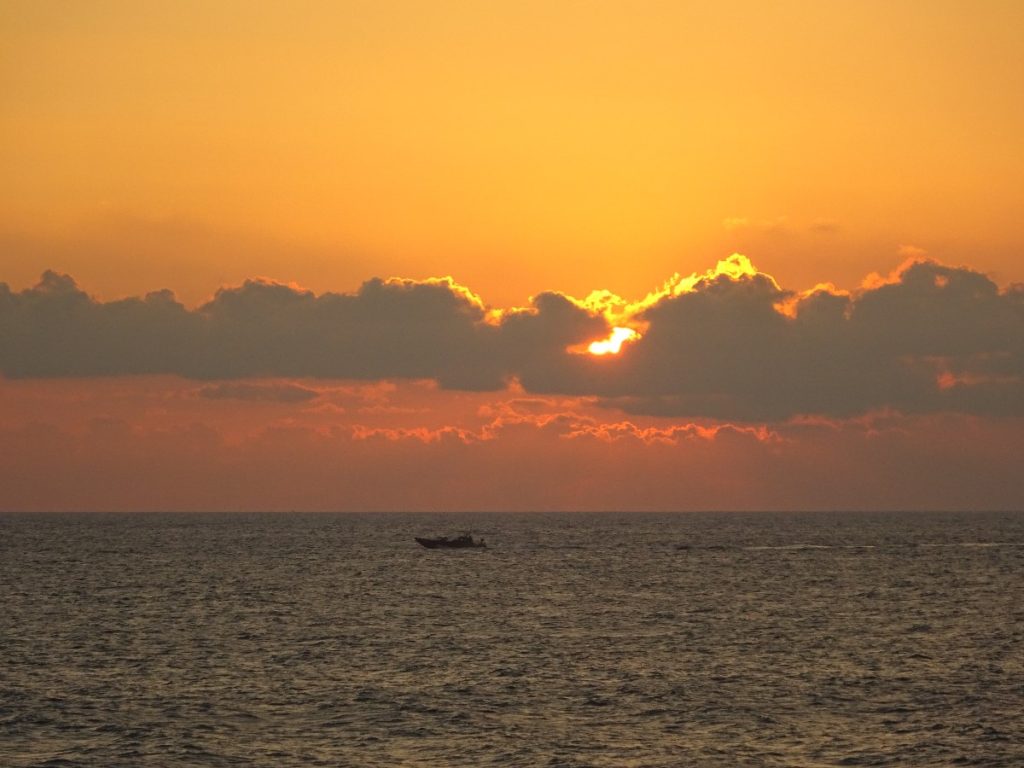 Evenings in Galle bring all of its tourists to the walls of the Fort. The stretch offers unrestricted views of the sky turning hues of orange, and the waves shimmering in the fading sunlight. You may even see a lone fisherman making his way to the shore. 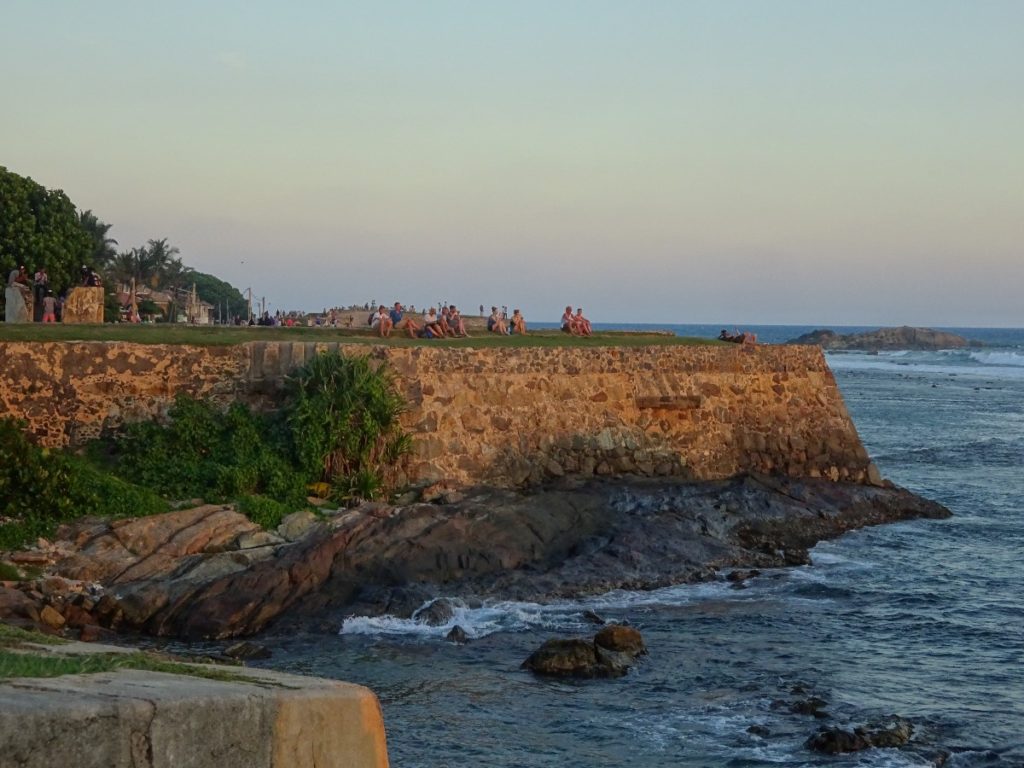 It felt strange watching the sun set into the ocean as opposed to the sunrise we have on the beaches of our Coromandel Coast. A good opportunity to get some beautiful photographs, but also one to enjoy the simper pleasures of life. 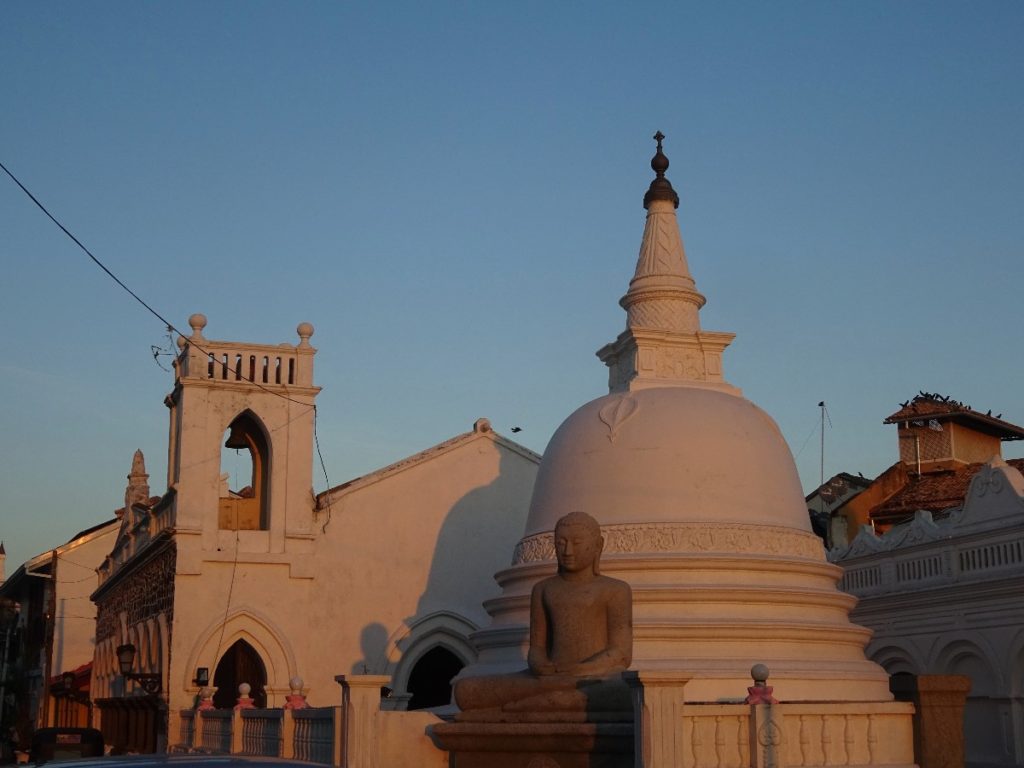 Don’t stop at the sunset though, because nights come with clear skies and a chance to spot stars, planets and constellations. All shops shut early, but restaurants stay open till about 10pm, so venture out for a stroll through the lovely streets, and perhaps a nightcap to top it off.

Climb Some Rocks on Bentota Beach 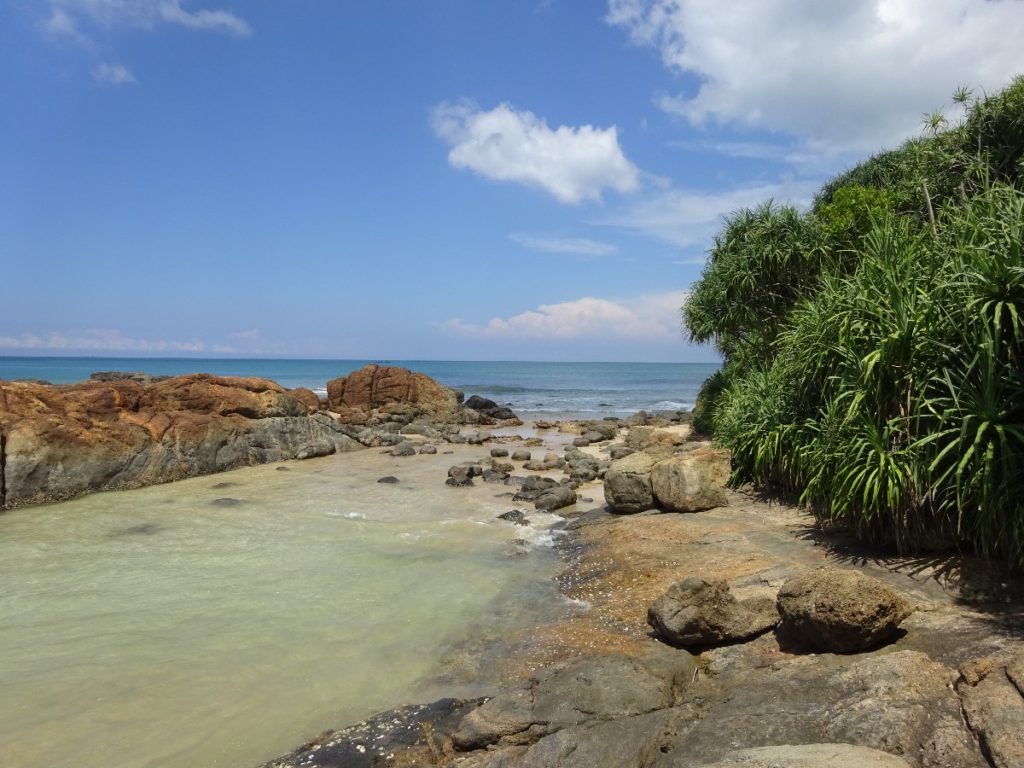 Halfway back to Colombo, the beach town of Bentota is popular among European tourists and the resorts are filled with families looking for a sunny break. To get to some of the resorts, you have to take a boat from the mainland, through the Bentara Ganga River, to the beachside. 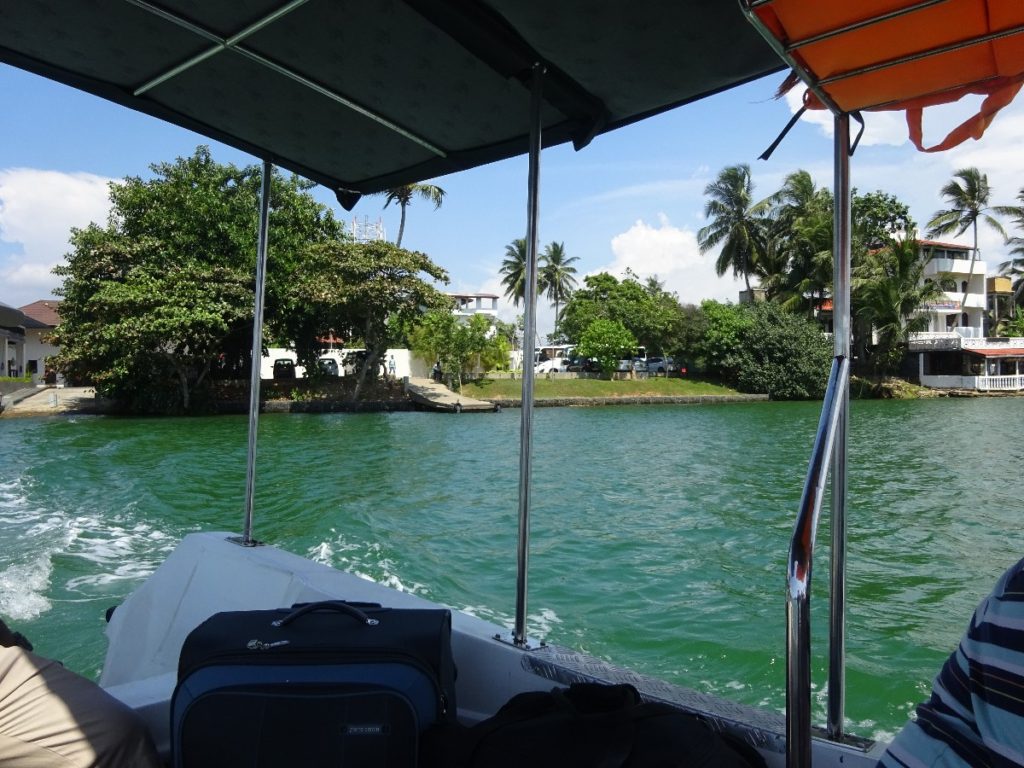 Bentota beach is flanked by the ocean and the saltwater river, so it’s lined with thriving mangroves. Mostly sandy, the beach also has some rocks that have been shaped by time and tide. 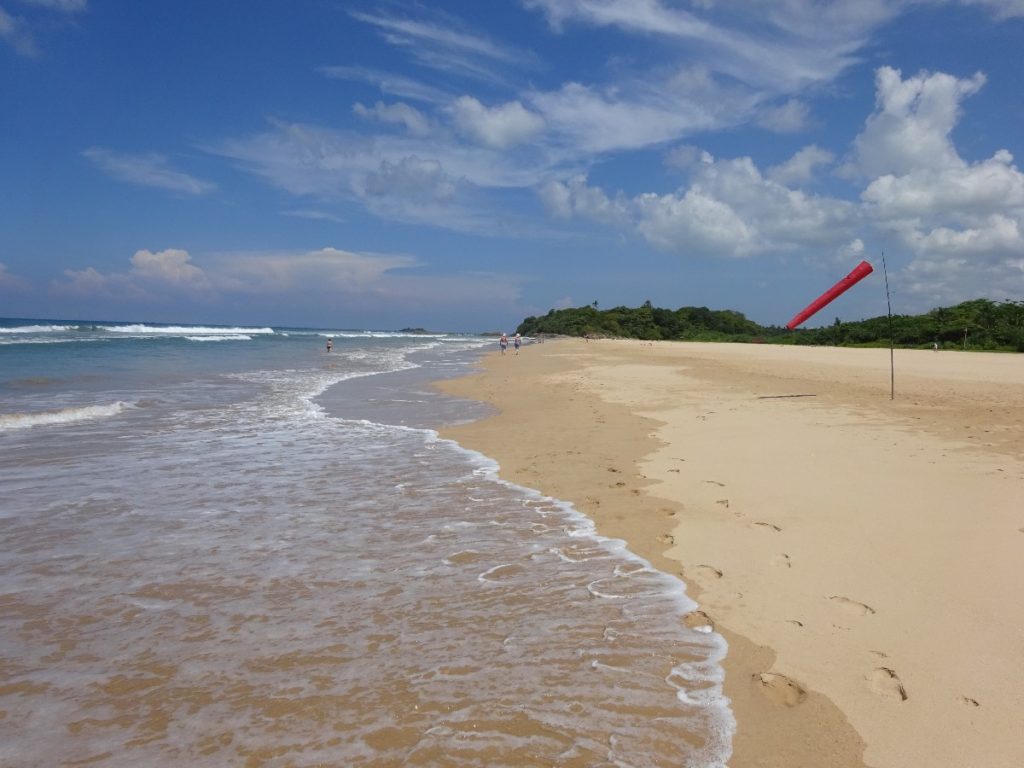 Climbing up the rocks means you can watch a whole range of crabs and sea animals making home against the walls, along with trapped little fish taking leaps of faith from one tiny pool to another in hopes of reaching the ocean. You can also take a boat ride to see saltwater crocodiles, or treat yourself to water sports at the beach. 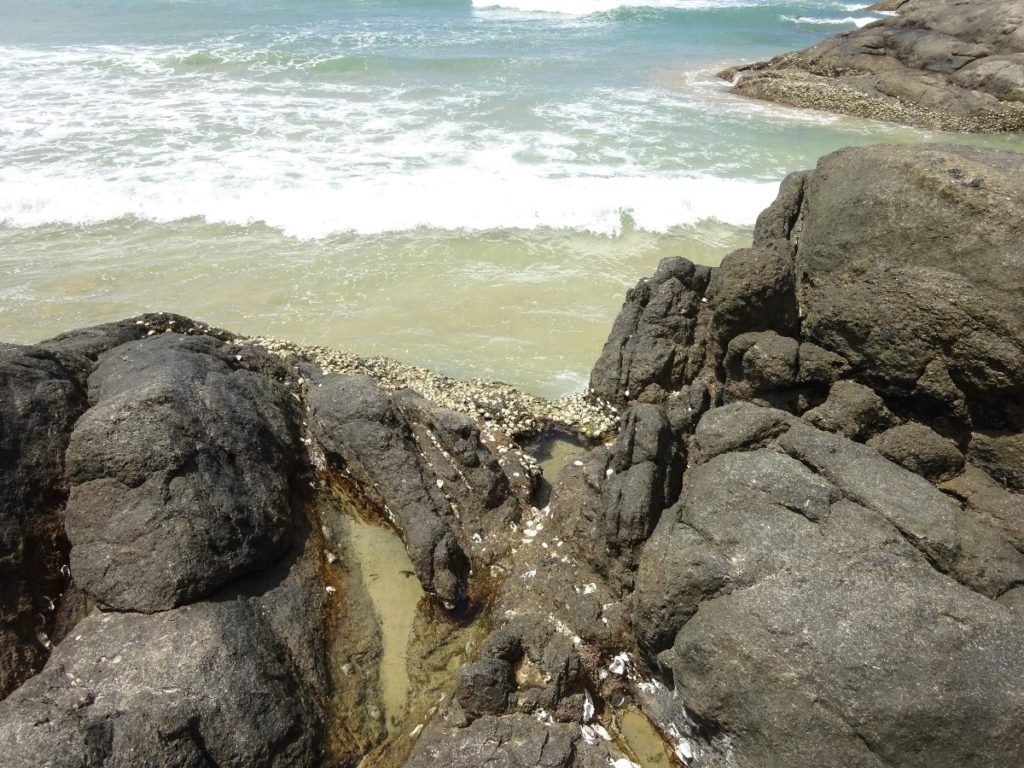